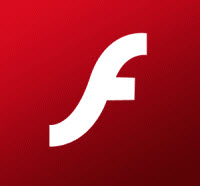 When the first iPhone released, the lack of support for Adobe Flash was a big deal. Desktop versions of website wouldn’t be able to display all the content available and the experience would be “incomplete.”

Now with iOS at version 5.1 and Android 4.0 in the wild, does having Adobe Flash even matter?

As a frequent user of both iOS and Android, there are pros and cons. Tom left Android for iOS, and while I understand his reasoning, adding a new OS to aged hardware (as he did) wasn’t the best idea in my opinion.

Adobe Flash was very important for desktop websites for showing dynamic graphics and video content. YouTube is one of the biggest sites that use Flash support. Many of Google’s own services use Flash (from the occasional crash messages that flow through all the open services I use).

A lot of the biggest sites that offer video are loaded through Adobe Flash. At the same time, the introduction of HTML5 has changed necessity of Flash support for many websites. Facebook’s iOS and Android apps use HTML5.

How mobile has changed websites

Sites also have developed mobile-specific versions of their desktop sites, offering the same content in a streamlined interface. Sometimes it’s a little more difficult to navigate, but the top stories are usually easy to find.

The other option sites have taken to is developing their own apps. While they may just be shortcut links to the mobile-version of the site, they are optimized for mobile devices. Even though YouTube has its own app, you can always browse through web browser by adding “http://m.youtube.com“.

Flash has had some impact on mobile gaming, but I’ve only ever experienced an app absolutely needing Adobe Flash once. Many developers are using Unity or some other development platform. HTML5 theoretically makes it simpler to deal with the differences in iOS and Android, but I haven’t seen many game apps that use this yet.

Since most video sites are the most common users of Flash content, I tested some of the sites that I regularly visit. iOS does have apps that support Flash content like Skyfire on iOS, but this is through the default browsers for both operating systems. 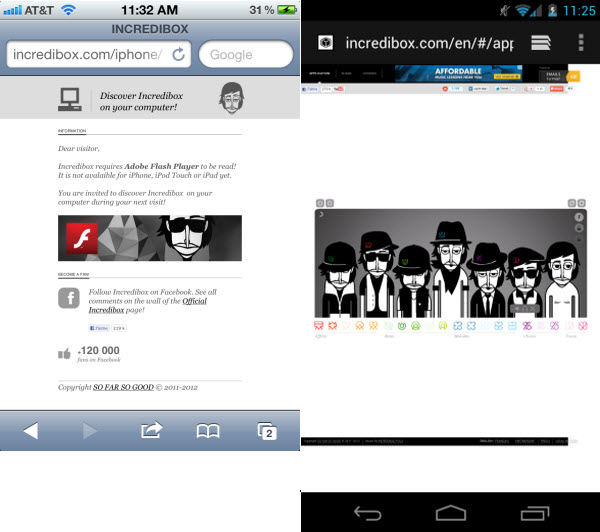 Nick mentioned this site before and I was quickly sucked into the fun of crafting songs. Using the default web browser on Ice Cream Sandwich, Incredibox loads the site and allows the same functionality as the desktop browser. The only main difference between accessing the site through the phone and desktop browser is the mobile browser has some function delay. The site still functions identically, it just takes longer to perform the same options due to touchscreen control.

Incredibox on Safari will not load. The site even has a nice message saying that “it is not available for iPhone, iPod Touch or iPad yet.”

Incredibox relies on Adobe Flash for its entire functionality, but the site is best experienced through a desktop browser. 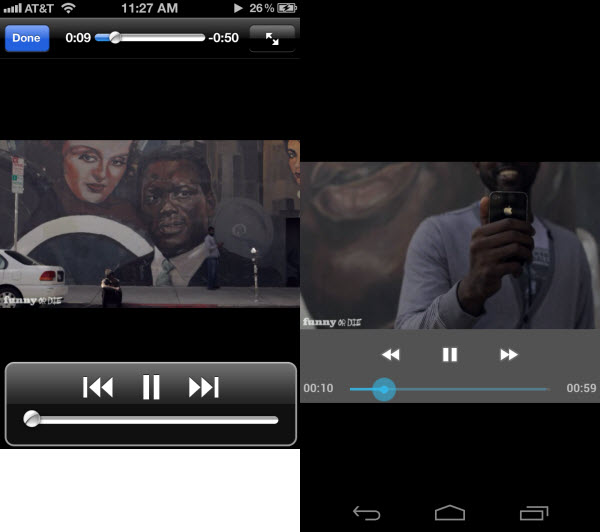 I was curious to know how Funny or Die worked outside of its iOS and Android apps. Going to the site through Safari or Android browser loads the mobile web version. Both sites have identical functions and it is easy to browse through the different videos.

Playing videos is also identical, with both browsers loading the video without any issues. In this case native Flash support isn’t even necessary. Where the Funny of Die mobile site has an “one up” on the dedicated app is that it’s easier to browse for videos through the mobile site where the app only shows the newest or most popular videos. 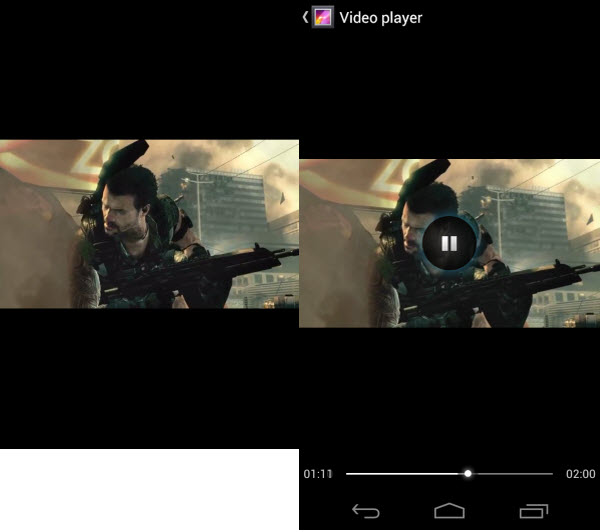 Whenever I miss some video game related video, I usually head to Gametrailers. But I always go to Gametrailers through a desktop browser. Looking at the site through a mobile browser again loads a mobile-centric view of the site. Strangely, while Safari loaded the Call of Duty Black Ops 2 trailer in the same browser, ICS’s browser opened the video through the video player. But both videos played without any problems.

It’s apparent that Gametrailers knew that they had to adjust for their viewers who use mobile browsers to look at their site. The massive amount of video content the site contains could have caused Gametrailers to lose a huge share of traffic and they were intelligent to develop for mobile browsers quickly.

Even though Adobe Flash appeared to be a make-or-break utility for mobile devices originally, it didn’t have the tsunami effect of breaking the ability to view video content like some people originally thought.

Development of mobile web sites bypassed the original video content issue, dedicated apps also work around this, and the growth of HTML5 as the primary development tool for the mobile web is quickly making Flash an obsolete problem.

Adobe Flash may have been an initial hurdle for developers, but time has already shown that Flash’s dominance is quickly waning and doesn’t even matter on mobile anymore. It’s an interesting footnote, but the problem has quickly fallen in importance to other issues.