Mega Man Unlimited is a fan made homage to the 25 year old Capcom star, playable on Windows PCs. Developed by Philippe Poulin AKA MegaPhil, with Jean-Simon Brochu and Gabriel Leblanc, it’s an 8-bit era retro game influenced by Megaman 3 and 9-10.

Mega Man Unlimited has 8 stages of pretty brutal side scrolling platforming, 9 special weapons, an in game shop, and save and load functions. Keyboard controls are default, but if you have a controller plugged in before you start the game, you can use that too, assigning buttons manually. There is no charge shot for this Mega Man, so holding Fire doesn’t do anything. 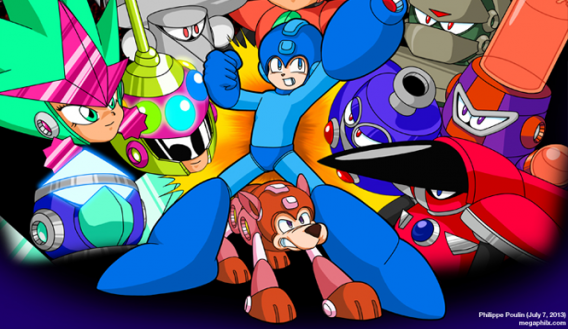 Megaphil is very clear that Mega Man Unlimited is a free game that is meant as a tribute to the series. It’s story is not related to ‘official game canon’, and isn’t a money making project.

The team worked on Mega Man Unlimited for five years, and the result will be instantly enjoyable for Mega Man and retro gaming fans. It’s really tough though, so be warned!

Mega Man Unlimited isn’t the only 25th anniversary tribute – there is also Team Reaverbot’s game, which currently has a demo you can download here. In December, another fan made effort, Street Fighter X Mega Man was released with the official blessing of Capcom.

Capcom has hinted at something special being announced for Mega Man’s 25th anniversary at this year’s Comic-Con, where the firm will have a big presence. Could a new Mega Man game be on the way?