A few months back, I started having problems with my beloved iMac. Lines would appear on the screen, as well as patches of odd color. But worst of all was the series of system crashes I suddenly started suffering, often more than once a day. They’d happen while using Firefox, or opening a stack on the Dock, or just moving my mouse. 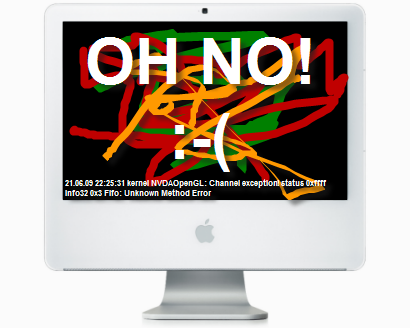 I tried disconnecting peripheral devices, used TechTool Deluxe to test the integrity of my hard disk and memory, but found no solution. Looking at Console for a clue (I probably should have done this first), I found lots of serious looking errors occurring just before my system crashes. They all took the form of:

Now, I may not be a Mac expert per se, but my experiences working with OS X, Windows and Linux told me that “NVDA”, “OpenGL” and “Channel exception!” pointed to the fact that something was gravely wrong and that it had something to do with my Nvidia 7300 GT video card. Which begged the question: is this a hardware or a driver issue?

Reading this helpful thread on the Apple Support forums, I’ve found that plenty of other iMac owners are suffering with the same problem. Consensus there is that it’s related to a driver/software fault… but this is confused by there being at least two problems which cause similar issues. User Asrenzo’s comment from yesterday helps to clarify the situation. After carrying out various tests, he feels certain that the software/driver theory is right. It seems that OS X 10.5.7 introduced a new, faulty driver for the Nvidia graphics card which simply stopped it from working properly.

“But what about the fix?“, you may be wondering. Well, the solution I’ve found is simple: install Snow Leopard. In my case, I backed up my entire home disk with Time Machine, erased and did a clean install, and then imported my apps, files and accounts from Time Machine. I’m not sure that the Time Machine bit is essential but I can say that not only does my 3 year-old iMac run like new now, I’ve also yet to see any Channel exception! or NVDA(OpenGL) errors.

If you’re suffering with frequent crashes and are at your wit’s end (and your Mac’s compatible, of course), try doing a clean install of Snow Leopard. It certainly seems to have worked for me.