The Sochi 2014 Winter Olympics are here, and what better way to get into the spirit than to play games reminiscent of some of the most popular winter sports featured in the games? With free browser games for Mac and PC, as well as some mobile games, you can be a part of the winter games without leaving the comfort of your centrally heated home, and without the risk of frostbite or major trauma. 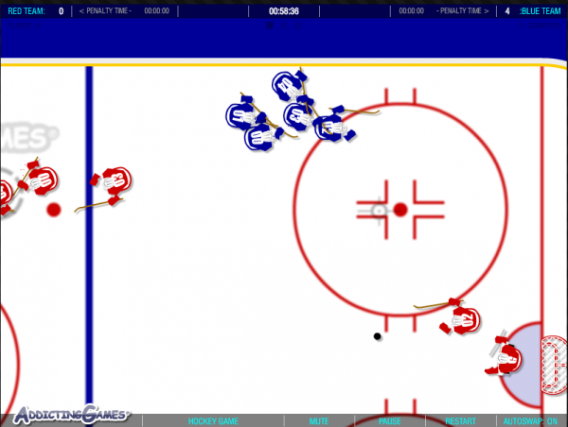 Best Hockey Game may not exactly be the best hockey game around, but this flash game is free, runs in your browser and it’s pretty fun too. Or it would be if I’d managed to score a single goal.

Use the cursor keys or the W-A-S-D keys to direct a virtual hockey player around the ice. The player fights for the puck, deflects its trajectory using the mouse, and fires it skillfully towards the opponent’s goal. Great sound effects round out this entertaining game.

If you want to play on your mobile, Finger Ice Hockey is the equivalent game to play while on the go. 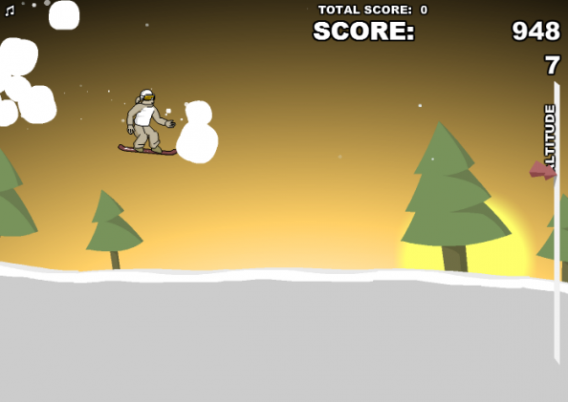 Snowboarding has only been included in the Winter Olympic Games since 1998, but it’s massively popular on mountains around the world. Downhill Snowboard 3 is a free flash game that sees you riding down a series of mountains, performing jumps and tricks to boost your score. It’s quite easy to play and even includes sickening crunching sound effects when you fail to land that forward flip.

If you want to play on your mobile, you can try Crazy Snowboard, where you can perform wild jumps on various slopes with different levels of difficulty. The beauty of snowboarding using flash games and apps? They’re a safer option than being out on the snow, although maybe not quite as much fun. 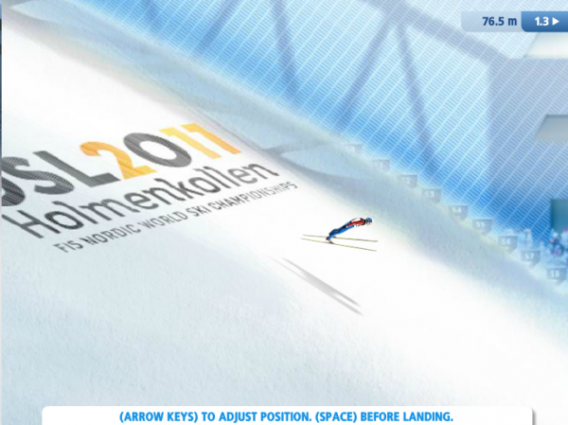 But there’s more than one way to get down a mountain. Fans of the Winter Games will know that one of the classic events to watch is ski jumping, during which possibly-insane competitors line up, ski down a hill at crazy speeds, and then jump hundreds of feet in the air.

In Ski Jump 2, you use the arrow keys to position yourself for the perfect landing; if you lean too far forward or back in flight, you’ll lose control and crash. My best distance was 127 meters, which means I may have some work to do if I want to be ready for the 2018 games in Pyeongchang. Out of all the games on this list, though, it was probably my favorite: it looks nice and it’s really difficult. 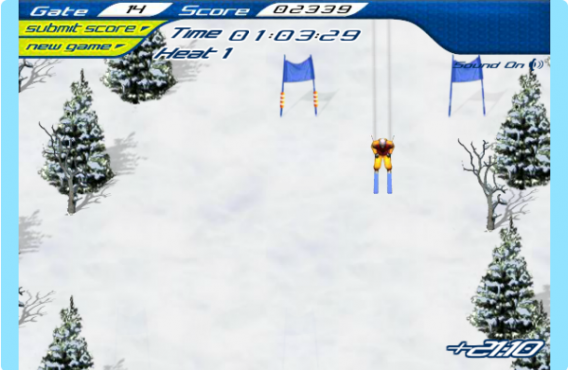 This is really where I should have started doing well; I love downhill skiing and I’ve done a few slalom races in my time. Candystand’s Downhill Skiing includes traditional downhill and slalom events in one flash game. You use your mouse to control where the skier is pointing, and click to jump the occasional obstacle. I found it difficult to get within 10 seconds of the best time, however, so unforunately, no medal for me.

The events are pretty much identical except for a shorter, more obstacle-strewn course for the slalom. There’s no Super-G course available yet, either. 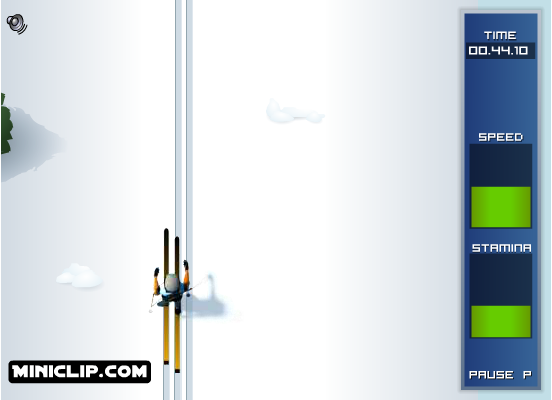 Nordic Chill is a 3-in-1 mouse-controlled flash game which includes Biathlon (Nordic skiing and shooting), Ski-jumping and Curling.

Controlled with only the mouse, Nordic Chill is easy to start but tough to master. It lacks some of the finesse found in other games, but makes up for that with its multi-discipline challenge. I got a combined score of over 11,000 points on my first try, placing me in the high 500s globally. Does that mean I can get a sponsorship deal? 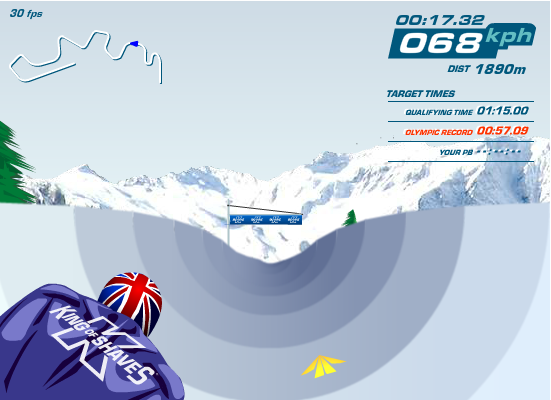 For the uninitiated, Skeleton is the one-person version of Bobsleigh, and the idea is much the same. You have to pilot an extremely fast sled down an icy track, trying to maintain control at high speeds with forces of up to 5G. King of Skeleton, free to play in your browser, puts you in the spotlight, honing your skills while you try not to fly off the track to your certain doom.

Use the arrow keys to keep the pilots on course, or in case you need to duck your head. You can collect packs along the way that’ll make your sled even faster. Of course, with great speed comes great responsibility: this game will take a while to master. 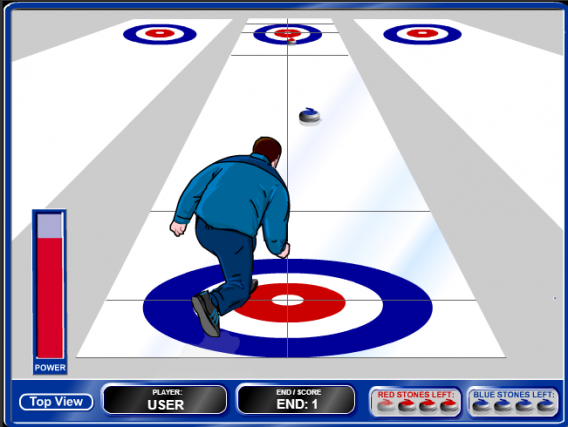 Where I come from, Curling returned to the national consciousness in 2002 when the British women’s team won gold. It all seems so gentile and relaxed, but naturally, there’s a lot of skill involved. These factors are all very well represented in the deceptively simple Virtual Curling browser game. Vying with the computer to see whose stone can end closest to the center circle is a lot more fun than it sounds, believe me. 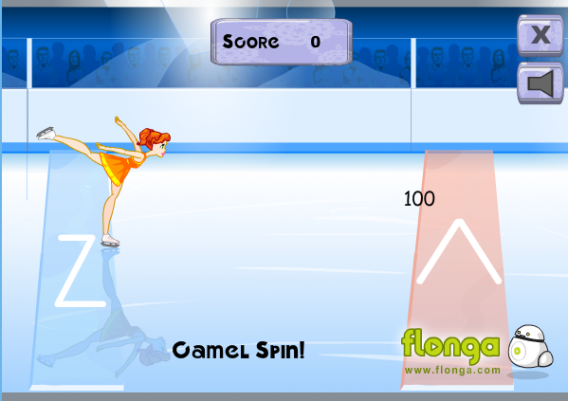 If, like me, you base your knowledge of figure skating on the film ‘Blades of Glory’, you may be in for a pleasant surprise. Figure Skating, which can be played in your browser on Mac or PC, has all the skill and none of the deadly potential for be-headings featured in that classic, terrifying documentary.

The game is played by trying to draw the shapes indicated in the ice with your mouse pointer. The figure skater will then perform, more or less, the artistic jumps and turns that you indicated. More or less. I made it to the Junior Championships and then realized that my heart wasn’t in it.

If you want to play on your mobile phone, there are similar apps available for Android and iPhone.

Is your favorite winter sport missing? Let us know and we’ll try to find it for you.

Inspired by this article on Softonic DE by Jan-Hendrik Fleischer.