We know that there are three main characters and how they may interact in missions, plus a lot more about the city of Los Santos and its surroundings.

Check out the second GTA V trailer below, and read on for our full preview of what promises to be the biggest game of 2013.

GTA V features three protagonists. There’s Michael who is a retired successful bank robber. He is in the witness protection program, and while his life looks idyllic, under the surface he hates his high maintenance wife and has a terrible relationship with his teenage kids. Stressed out and bored at home, Michael is itching for some more excitement.

Trevor, in contrast, is a career criminal with violent urges, and has very little self-control. He’s the loose cannon of the three, dangerous and unpredictable. A one-time heist partner of Michael’s, Trevor’s life took a very different path, leaving him living in a shack in a poor area called Blaine County. Rockstar explains how he represents the flipside of criminality, the opposite of the controlled and restrained Michael.

Franklin is the youngest, in his mid to late 20s and works as a ‘repo man’ for a car dealership, collecting debts from unfortunate people who didn’t keep up their payments. He wants to do something with his life, but he’s stuck in a rut and needs a way out. He represents how the reality of being a hustler no longer lives up to the image of the past.

A desire for money will bring the three together in GTA V, in a series of heists where you’ll get to switch between the characters at different times.

It’s possible that some characters from the last game might make appearances, but Rockstar is not spoiling the surprise! No one from San Andreas or the earlier games will feature. Personally, I’d love to see Brucie from GTA IV make a cameo, as he’s one of the funniest Rockstar creations to date. 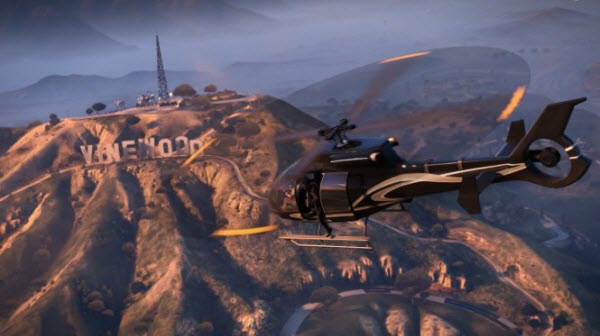 Los Santos is the setting this time around. It’s based on sun-bleached Los Angeles and its surroundings, and Rockstar claims it’s bigger than GTA IV, San Andreas and Red Dead Redemption put together! The city will have all the variety of Los Angeles, and and much more. To mention a just a few things, the surroundings of Los Santos has villages, the huge Mount Chiliad, wildlife, a working golf course, and a military base.

GTA IV’s Liberty City was a great place to explore, and full of things to do. It looks like Los Santos will be just as atmospheric, but much bigger and more varied. The size will allow for longer drives, more activities, and the return of planes. If you were a fan of San Andreas and found GTA IV claustrophobic, Los Santos could be just the place for you.

Getting in a car with one of the great radio stations and just driving around is one of my favorite GTA experiences, and having such a big environment to explore in GTA V sounds amazing to me.

Rockstar is promising much more mission variety this time around, culminating around a series of big heists featuring our three protagonists. The heist in GTA IV was great, and the mission in the Libertonian museum which was revisited by each of the three GTA IV characters was one of the most memorable. Combining these for GTA V could be fantastic.

There will be more vehicles to play with than ever before. Planes return, with parachuting, and bicycles are also back. There will also be jet skis, helicopters, ATVs and we’ve seen many of the classic GTA cars too.

Like GTA IV and Red Dead Redemption, GTA V will have plenty of mini games and activities. Each character will have his own hobbies, and there will be options as diverse as triathlons, yoga and golf to indulge in. There will also be lots of random people to get involved with. These little encounters really brought Liberty City to life, so it’s a relief to know they will feature more in Los Santos

Not everything from GTA V and San Andreas will appear. There won’t be the weight gain and loss that we saw in San Andreas, but you will be able to change your clothes. GTA IV’s romance side missions are out, but each character will still have friends to hang out with. There will be multiplayer modes, but so far Rockstar has not announced any details.

Earning cash has been a mainstay of the series, but there’s rarely been a lot to do with your loot beyond buying ammunition and clothes. We don’t know the details, but Rockstar is promising a better and more fun economy this time, though it won’t involve buying property.

What else are you hoping to see in GTA V?