GTA Online is finally getting a casino 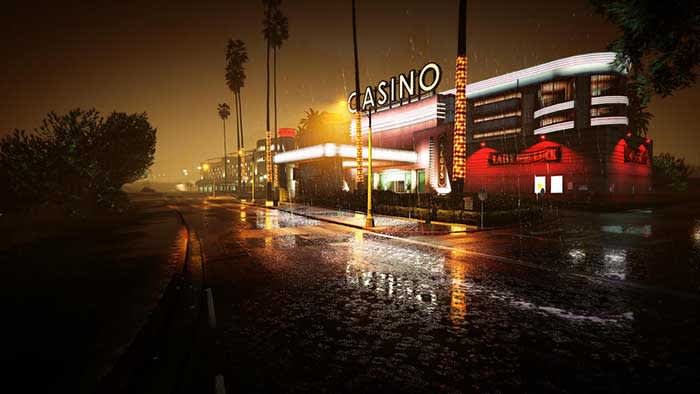 Grand Theft Auto Online players have been clamoring for a casino ever since the game hit shelves several years ago. The empty casino building, present in the game since launch, has been taunting players with the promises of high stakes gambling for some time. Now, it appears that the vacant casino is finally about to come to life, with Rockstar teasing the addition of a glitzy and glamorous gambling paradise in a forthcoming update to GTA Online.

GTA Online is finally getting a casino

In late June, Rockstar took to Twitter to tease the forthcoming Diamond Casino & Resort. According to Rockstar, the casino will be “a brand-new luxury destination and the largest mass entertainment complex of its kind in Southern San Andreas.”

The Diamond Casino & Resort – a brand-new luxury destination and the largest mass entertainment complex of its kind in Southern San Andreas – opening its doors to one and all later this summer.https://t.co/VJFampsWor pic.twitter.com/9SGWcOyHhd

Aside from this tantalizing teaser, Rockstar hasn’t offered much in the way of specifics when it comes to gameplay or actual features. That said, Rockstar is no stranger to gambling minigames. Red Dead Redemption players will know that classic casino staples like Blackjack, Poker, and a variety of dice games are all present in the single-player campaign.

In addition, Red Dead Online recently introduced multiplayer poker tables to the game world. It seems like a safe bet that players will see similar games in Grand Theft Auto’s casino as well. Rockstar has also teased something called “spinning the Lucky Wheel.” While we don’t know exactly what this entails, it seems to indicate a suitably high stakes roulette game. We’re envisioning vast sums of money, cars, and even property as potential prizes.

Aside from the standard slate of casino games, some data miners have reportedly found hints in the game files that indicate horse racing may also be added in the casino update. That would make sense, as the casino just so happens to be located next to a fully equipped horse racing track. In addition to betting, Rockstar has stated that the casino will include high-end luxury shopping and hotel rooms, valet parking, as well as a selection of bars and lounges. Rockstar seems on track to bring a taste of Vegas directly to the world of GTA Online.

Despite the announcement, much about the casino still remains uncertain. Rockstar has yet to announce an official release date for the update but has stated the casino will open before the summer is over. That’s still quite a large window, as summer doesn’t officially end until Sept. 23. Despite the lack of a release date, data miners have again delved into the game files to find that updates will be slowly rolling out over time:

There were rumors that GTAO Next Update will feature the casino, I can confirm it.
Just now, R* have updated the background script to set specific dates that will apply changes to the casino.
You'll notice changes happening near the casino as we move closer to release.#GTAOnline pic.twitter.com/nPb4V9OVg3

Interested players should stop by the in-game casino from time to time to watch the progress on the construction as the building nears opening. Based on these hints, it seems likely that the appearance of the building itself will be receiving a massive overhaul.

We also have yet to receive news about any other content included with the update, such as outfits, vehicles, and other casino-themed items. Knowing Rockstar, however, these items will doubtless be coming out alongside the release of the full update. If Rockstar follows the pattern, players can also expect to see cash rewards and other in-game bonuses in the lead-up to the casino’s launch.

GTA Online players can check back with Softonic for more casino news as it gets revealed, as well as other updates on GTA Online and the forthcoming GTA 6.