My inner fashionista is a little more ordered and less chaotic these days, thanks to some really helpful apps.

If you grew up in the 90s, you’ll remember the classic movie Clueless, starring Alicia Silverstone as spoiled rich kid Cher Horowitz. In an unforgettable scene that undoubtedly every girl dreamed about, Cher decided which wonderfully 90s outfit she would wear using a  computer that stored every item of clothing she owned and all the ways they could be combined. 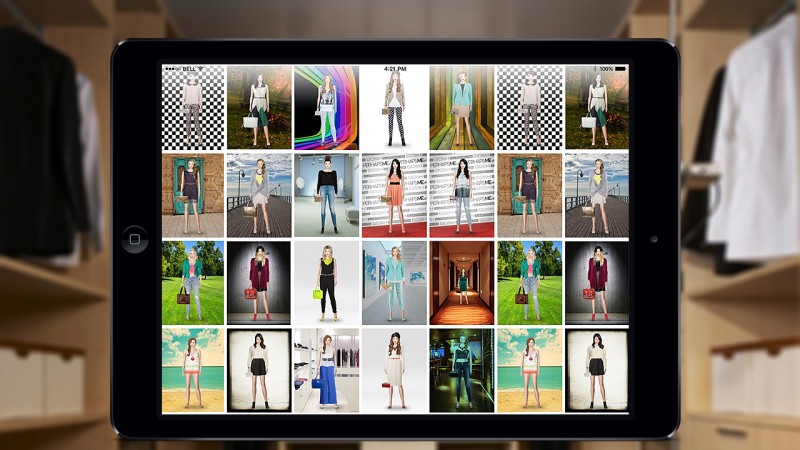 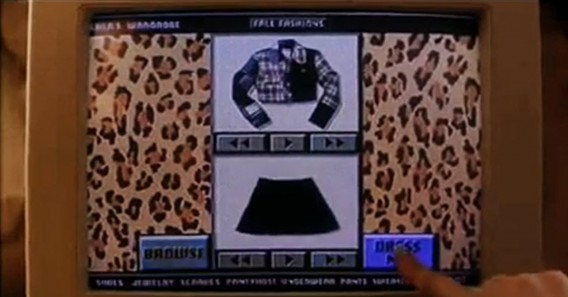 Raise your hand if you remember the Clueless computer!

That scene left a lasting impression on me. Having a database of my clothing would have served me well on all of those mornings I stood in front of my closet, scratching my head. Of course, that was back in the 90s, and though there was indeed some software for fashion junkies, it was either very expensive, or very cheesy. Sometimes, it was both. What’s more, digital photography was still something from science fiction, which meant that quickly snapping photos of your entire wardrobe was actually a mammoth task.

Fortunately for us, times have changes and today, thanks to smartphones, apps and websites (most of them free), getting our clothes under control and deciding what to wear isn’t just possible, it can also be fun!

I’ve been trying various apps recently, in search of the perfect fashionista tech set-up. Here, I’ll take you through some of the best apps for organizing my fashion choices.

Maybe “I can’t find anything to wear!” was a valid complaint way back in the 1.0 era, but these days, it’s not a valid excuse: anyone with a smartphone or tablet has the possibility of photographing and categorizing their clothes so that everything is kept under control.

I’ll admit, I’ve got a lot of clothes, shoes and accessories (some people have even suggested I have too many), and getting everything out of my closets and drawers to be photographed is a pain in the neck, but it’s something that needs to be done. At the moment, I’m documenting anything new I buy, as well as older stuff, as I wear it. The next phase will be attacking the clothes still in storage.

There are lots of apps that will help you with this task. I’ve tried lots, and I like Stylicious (iOS/Android) best, mainly because of all the options it offers. 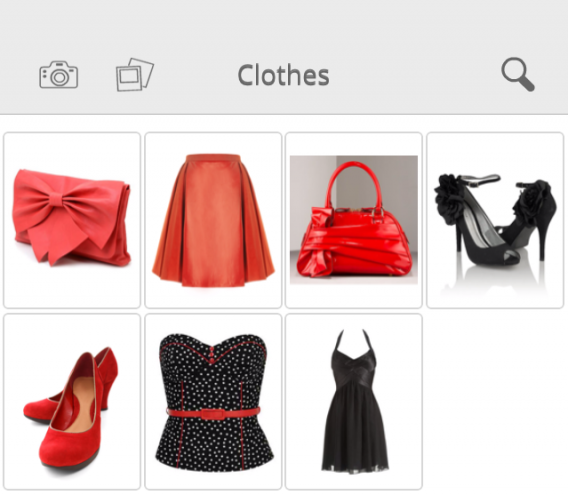 Stylicious lets me put each piece into various categories (like item, style, season) and, more  importantly, lets me add keywords, which makes it easier to find things in my enormous virtual wardrobe.

Although it might sound a bit crazy, being able to add keywords doesn’t come as a default in most apps; this is why I’ve ruled apps like Dress App (Android/iOS) out, even though I was impressed by it at first.

Once you’ve made an inventory of the contents of your wardrobe, the next step is planning your outfits, something I can do with both Stylicious and Dress App. When you’ve got all your clothing itemized, you’ll see how much easier it is to create awesome outfits by combining what you’ve got.

Both of these apps also let you save outfits. Once you’ve gotten a few perfect looks stored, all you’ll have to do is browse your outfits and the “what will I wear” drama will be over a lot quicker. 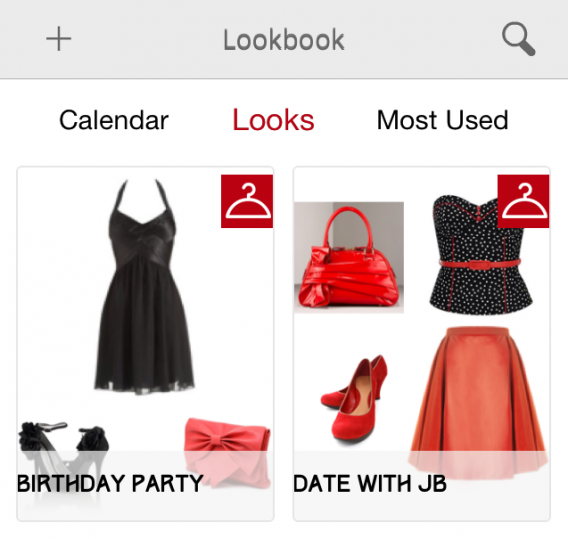 I always have my favorite looks saved for quick access

Whether it’s because you’re bored with your clothes, or you don’t know how to wear them, it’s pretty likely you’ll need a little inspiration at some point. Not surprisingly, the internet is full of apps that will help you gather ideas and looks.

One of the most popular apps is Pose (Android, iOS and Web), a social network for people who like to share their looks. To start, you can follow the accounts of some of your favorite fashion gurus. You can also branch out and explore the community; you’ll be surprised at the number of random people with bags of style, very often similar to your own. 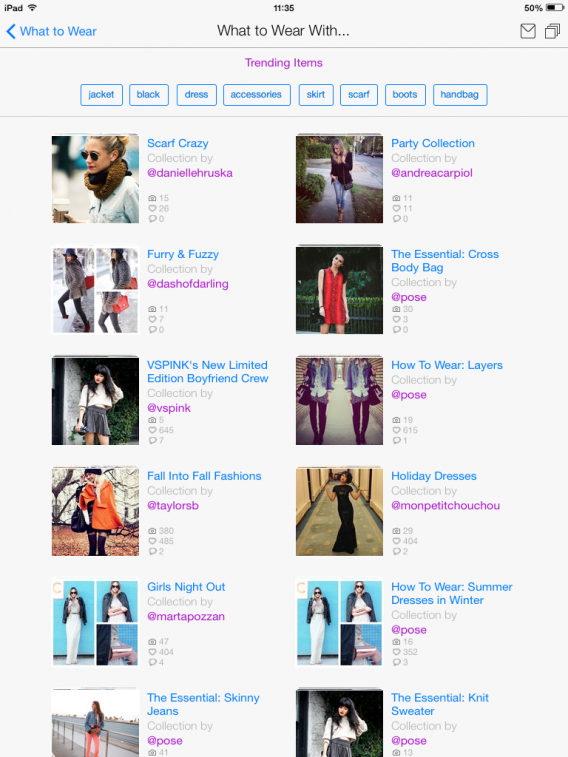 Many Pose users have some real fashion sense

If you’re just looking for specific pieces, you could also take a look at Pinterest (Android, iOS and Web) and its thousands of boards. The problem is finding good fashion pins among the photos of kittens and cupcakes, so if you want to cut right to the chase, you might want to take a look at similar apps that just deal with clothing and accessories.

If that’s what you want, I’d stick woth Clothia (iOS), which looks like Pinterest, but lets you make collages of your favorite clothes and, like the wardrobe organizing apps, lets you import your own wardrobe too. 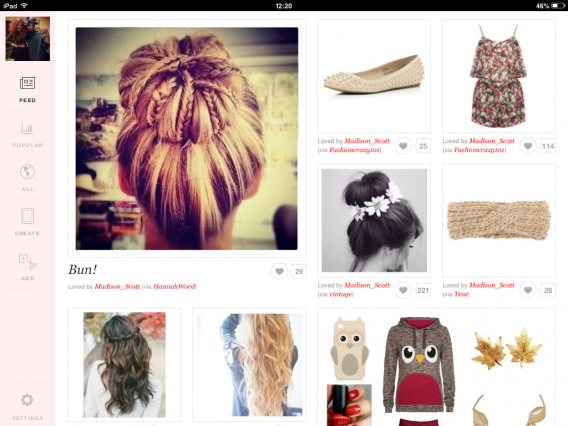 Polyvore (iOS and Web) is a veteran app with similar functions. This app includes a feed of looks from other users, as well as a huge database from which you can make your own. 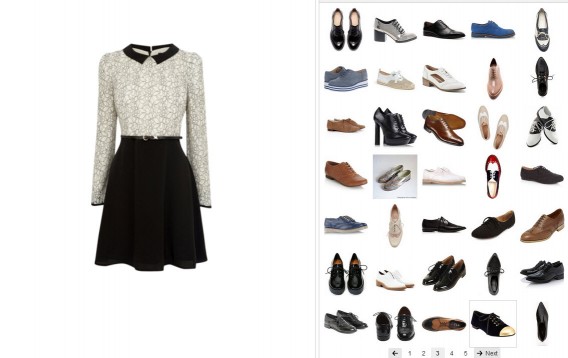 When you’re feeling brave enough, you can share your own outfits too. Maybe you’ll be the inspiration for a fashionista on the other side of the world. Pose is perfect for this, as it’s the only app that specializes in outfits.

You could also start with Cloth (iOS). Unlike Pose, which is basically another social network, Cloth has the same feature that has millions hooked on FourSquare: it gives you points and achievements for completing tasks.

Another differentiating factor of Pose: Cloth doesn’t have a feed of looks from friends, and you can’t look at other users’ outfits. It’s clearly designed for more personal use, but that doesn’t mean that you can’t strut your stuff – the app has a ton of options for sharing images on social networks. 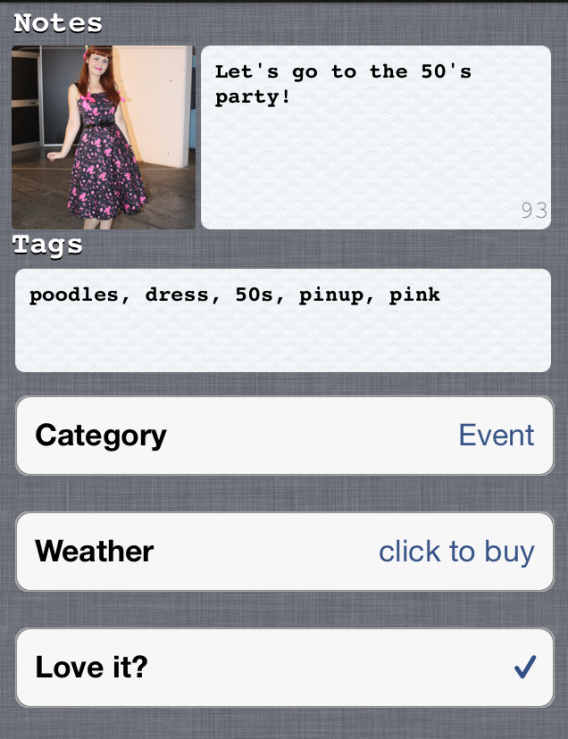 Cloth gives you total control of your stylish adventures

If having an entire app just to share your outfits seems like overkill, don’t worry. You can still use Instagram (Android, iOS, Windows Phone), which is chock-full of fashionistas who want to show the whole world what excellent taste they have.

You’ll be able to use the app to share your looks, even on a daily basis if you choose. The good thing about Instagram, remember, is that it’s totally ok to take selfies in front of the mirror. If you’re short on time, it can be a great option.

The best advice I can give you to ensure that your outfits reach the widest audience possible is to use (and abuse) hashtags. Don’t forget the classics, #outfitoftheday, its acronym #ootd and whatever other hashtags you can think of related to the pieces you’re wearing, the patterns, color or your hairstyle. 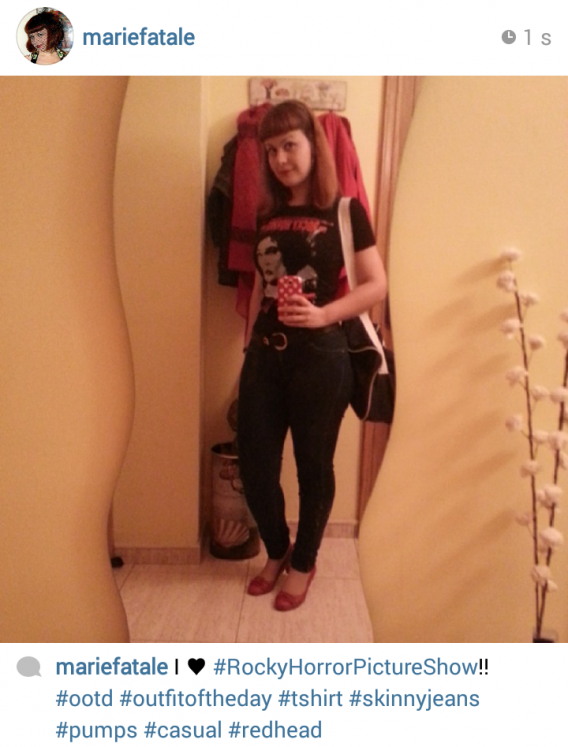 If you’ve followed my advice and your virtual wardrobe is categorized and ready to go, you might come to the slow realization that you have more clothes than you thought you did. If this is the case, there’s always going to be something you need: the perfect red dress, a comfortable peep toe in which you can spend a whole night on the town, or a bag in the right shade of green to wear to that wedding in May.

Although there are millions of online shops that you can buy from, if you’re shopping from your tablet or smartphone, an app will probably make things easier. One of the best for this is ShopStyle (iOS and Web).

Have you always wanted a blue cocktail dress? Have a look and you’ll find hundreds of options, in hundreds of styles and price ranges. That said, before you fall in love with an item of clothing, make sure ShopStyle delivers to your country. This is a much less serious problem than it once was, but it never hurts to check. 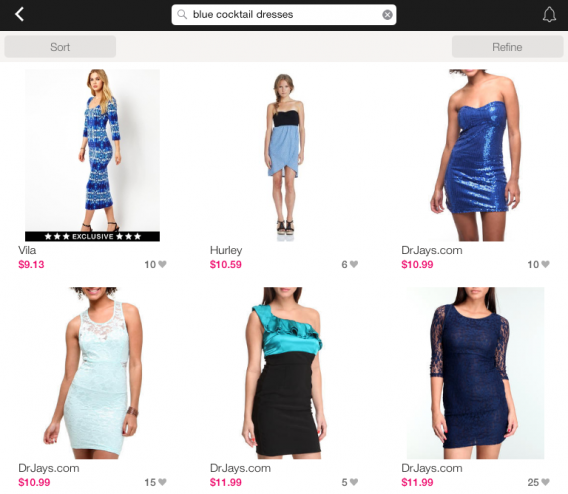 ShopStyle adapts to all styles and budgets

ShopStyle definitely isn’t the only app that can help you with your shopping, but its search criteria and extensive catalog make it the best.

Even so, if we’re talking about shoes, there’s a new app that might make a good impression. One of its strong points is that you can take a picture of a pair of shoes you’ve seen in a store and upload it to the app. Similify (iOS) will look for them in its database and tell you where you can buy them cheapest. Still can’t afford them? Well, Similify will let you know when the price goes down, or when they go on special offer in other stores. 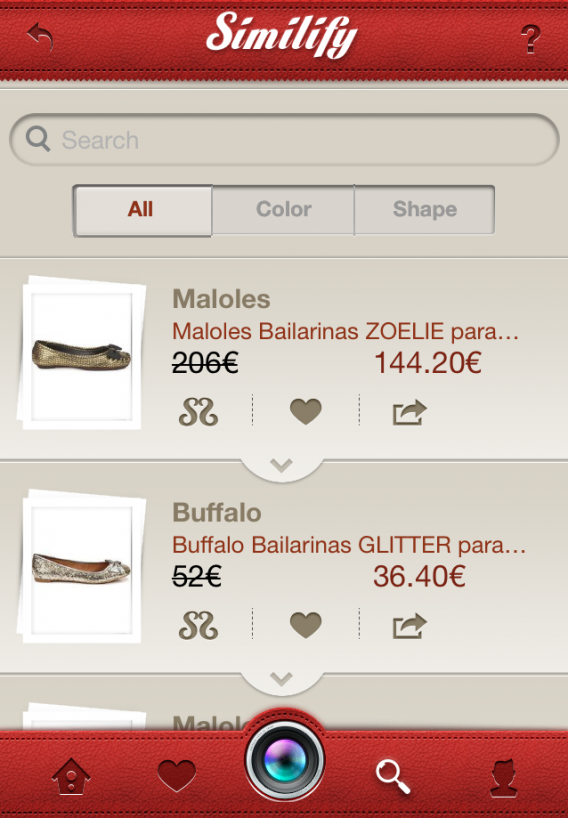 If you’ve made it this far, congratulations! You’re ready to get the most from your wardrobe and, more importantly, can shine as the true fashionista you are.

Here’s a quick summary of the apps we mentioned, and what they do:

What are your favorite styling apps?