What types of additional information do employers search out on job applicants once your resume makes it into their hands? Your online presence is a big part of it, claim Identified co-founders, Brendan Wallace and Adeyemi Ajao. 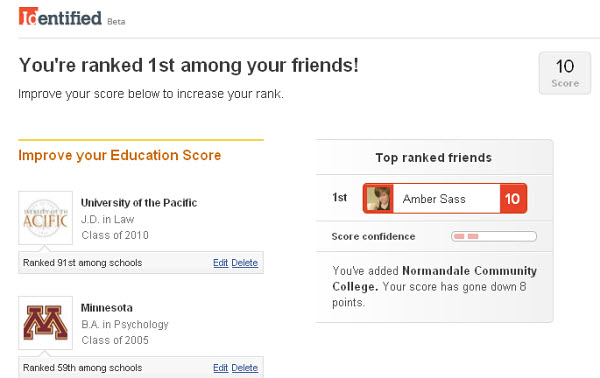 Identified is a professional job search engine that accesses its data via Facebook. Job hunters can have themselves ranked on a scale of 0 to 100, and employers can see the results during their hiring processes. Identified’s public beta was launched today.

The numerical score job hunters receive is Identified’s main feature, and it’s determined based on three factors: work history, education history and social network. Identified will automatically add the information you’ve already posted about your education and job history from Facebook. In addition, you can also supplement the information by adding additional companies you’ve worked for, your university major areas of study and school GPA.

Everything you add into your Identified profile will either add or subtract points from your overall score. The higher ranked your university is, for example, the more points you’ll receive for having attended. The same goes for your work experience and the friends in your network. Of course, if you’re the first one of your friends to have given Identified a try, you’re going to get zero points in that category, so your score might initially be pretty low (mine, for example, is currently sitting at a paltry 17).

It remains to be seen if Identified can really give other similar social networking companies like LinkedIn or BranchOut a run for their money. One thing the service has going for it is that there are already 40 million Identified profiles, mostly made up of unregistered members. That’s a pretty large resource pool for employers to pull from and compare scores. Some people might be concerned about whether ranking people based on only three factors is the best way to determine an employee’s fit for a specific position, however. As a resource to take into account on top of useful hiring practices though, Identified seems like it could be a pretty useful business professional social networking tool.