Looking for a new card game to play? Look no further than Munchkin. In the fast-paced original, players go toe to toe with zany, punny fantasy monsters while backstabbing each other in a mad scramble to the final room of the game’s dungeon.

It’s like speed-running Dungeons and Dragons, with all the traps, betrayals, alliances, character classes and races. 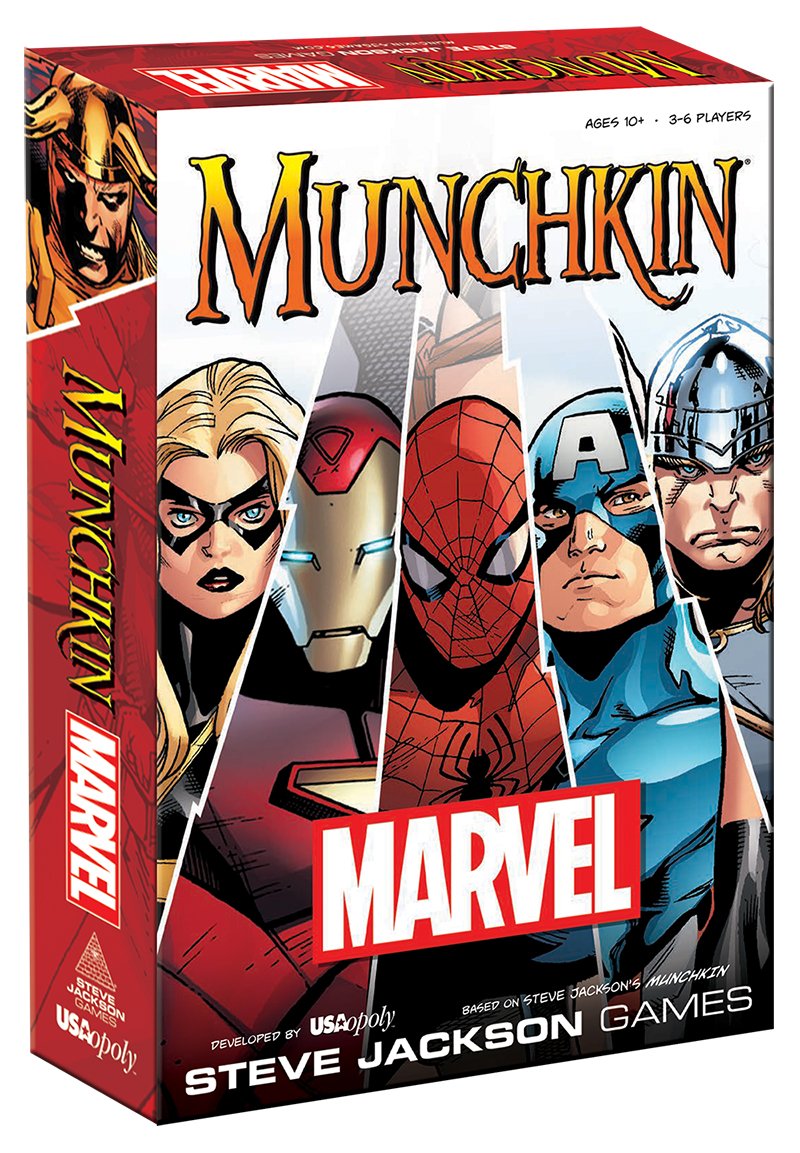 Munchkin: Marvel Edition is a variant of the original formula, but is set in the beloved Marvel Universe. If you’re anything like us, this year’s progress for the MCU has left a thirst for more content and interactivity, especially with the shortage of video games coming from the studio.

If you’re already familiar with Munchkin, a lot of the content here will sound familiar. If you’re totally new to the game and are looking for a fun way to sate your Marvel cravings with some friends, then this crash course is for you:

First things first, every player begins with an ID card like the one pictured above. All players begin at rank one, with the goal of the game being to reach level ten and become the new director of SHIELD.

These levels are (almost always) earned by defeating monsters, most of which will bring you one level closer to your goal. Of course, the other players are trying to accomplish the same thing. That means that the closer you get to reaching level 10, the more they’ll start gunning for you as well as the monsters.

Things can get pretty intense.

Aside from the ID cards, Munchkin: Marvel Edition has two decks: The Door Deck (black); and the Treasure Deck (white). Shuffle them and keep them separate from each other. Start the game off by giving each player four cards from both decks, totaling eight cards per player. 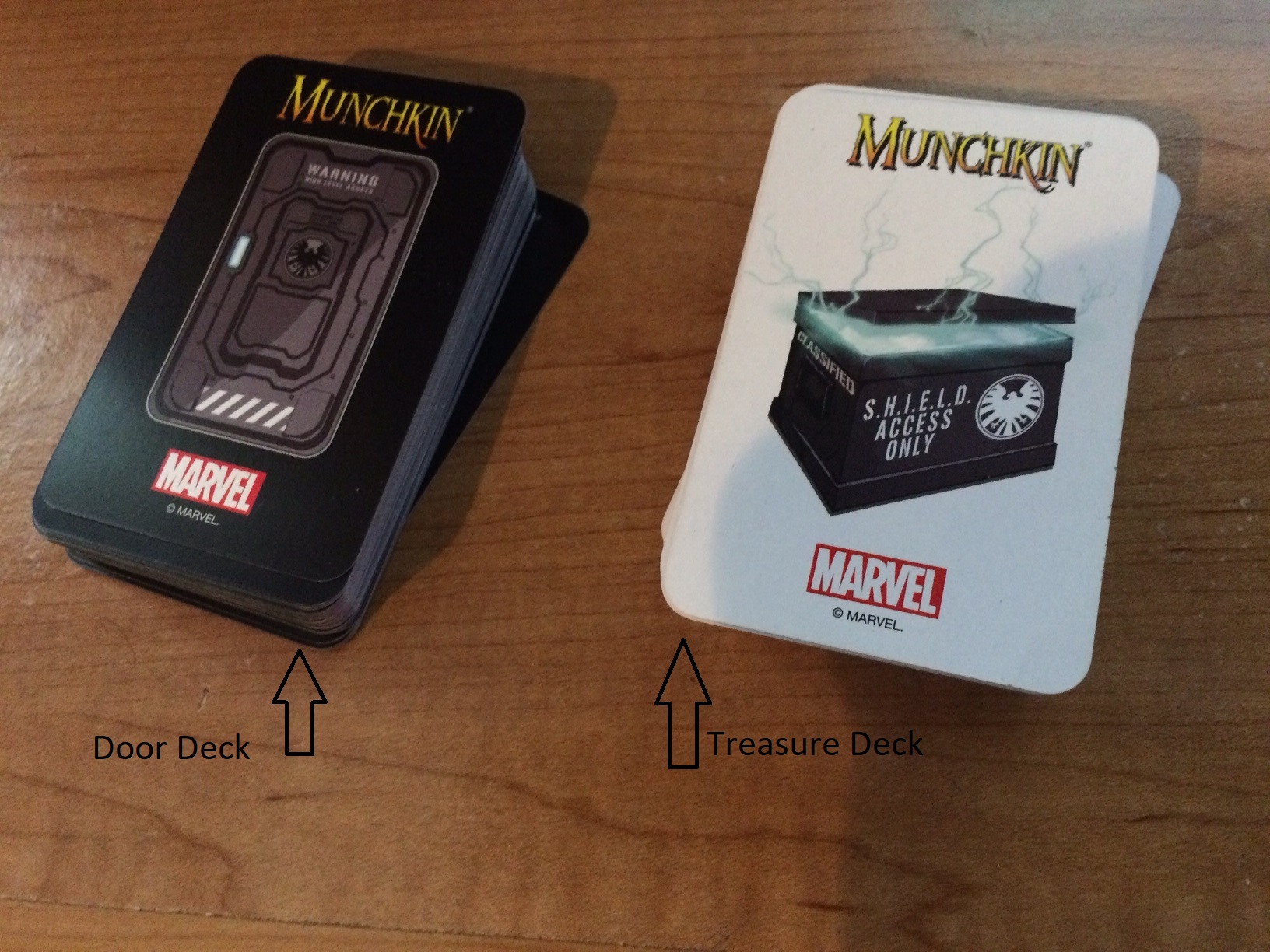 How the game works

At the start of your turn, draw a Door Card face up. No matter what you draw, you are immediately affected by it, be it a monster or a trap. (If it’s anything else, like a Wandering Monster or Illusion, then simply add it to your hand.)

If it’s a Monster:

If you draw a monster then you are immediately “in combat.” Combat in Munchkin: Marvel Edition is quick and dirty. It’s done by comparing your overall point total with that of the monster(s) you’re currently fighting.

Your score is as follows:

Your rank (the current number you’re at on your ID card) + gear (any hand, foot, helmet, or armor you have equipped) + Allies (you can have one ally of your choice unless specifically stated otherwise) + any powers you have (the purple cards like ‘telekinesis’ or ‘super strength’).

You only win the fight if your total number is higher than the monster’s level. In the case of a tie, you still lose. If you win, you get to go up one rank and pick however many treasures the monster awards you with (it will say on the bottom of the monster card). And that’s the end of your turn!

If it’s not a monster

If the first card you pick is not a monster, then after adding it to your hand (or suffering the trap) you now have two choices:

1. Loot the room: Draw another door card to add to your hand

2.  Look for trouble: You can instead choose to fight a monster that you already have in your hand. If you choose this, combat plays out exactly as it would have had you drawn a monster for your first card.

But wait; there’s a catch. At the end of your turn, you MUST have only five cards in your hand (unless a specific card or ability says otherwise, like the Utility Belt).

That means you must either sell the excess cards or give them to “charity.” Charity, in this case, refers to the lowest-ranking player in the game. Pick what you give away wisely; you’re probably not getting it back!

Some cards in the Munchkin: Marvel Edition treasure deck have a value at the bottom. Players can sell increments of 1,ooo gold in exchange for a level. You only go up one level at a time, and anything more or less than 1,000 will not do you any good.

Marvel Munchkin’s gear system differs a little from the original game. Here we have five different options: One-handed; two-handed; helmet; armor; and boots. You can have only one of each type, but are allowed two one-handed items (you’ve got two hands).

Two-handed items have a bigger bonus, but will take up both of your hand slots.

Since you can only hold five cards, you can also “carry” any amount of gear that you’re not currently wearing. This is effectively a face-up pile where anything you’re not currently using is piling up to be eventually discarded for a level up, or traded with another player. You can only carry gear, though, so this pile won’t allow allies, powers, or anything like that.

Traps in Marvel Munchkin are nasty. If you’re so unlucky as to draw one face-up at the start of your turn, then you are the one affected.

Otherwise, you can hold onto traps to throw at other players. You can do this any time, but so can they. Be careful who you pick on! Traps have a wide array of effects, ranging from combat penalties to skipped turns, to losing levels or gear.

Many treasure cards are “one-shots.” These are one-use items like Super Soldier Serum or Vibranium that can be played on either your side or the monster’s. Play them against a monster you’re fighting to get that last edge you need to win the fight, or tack them on to a monster that another player is fighting to make their fight tougher.

When the monster is too tough

If it looks like you’re not going to be able to beat a monster, don’t fret. The first thing you should do is ask other players if they’d be willing to help you. They may agree, but likely won’t do it for free.

Remember that even if you accept their help and have to give them some treasure, they’re not going to level up just for helping. You, on the other hand, will.

If no one wants to help you, then you can try to Run Away. That means rolling the die and leaving your fate up to chance. If it lands on a 5 or 6, then you successfully evade the monster. You don’t get treasure or levels, but you live to fight another day. Roll a 1-4 and the monster catches you. Then you’ve got to suffer Bad Stuff.

Every monster has its own Bad Stuff, and it’s never pleasant. A monster’s unique Bad Stuff is written at the bottom of their card.

Should the monster win the fight and you fail to run away, then you’ve got to suffer it. Sometimes it’s just losing a turn or getting a combat penalty, but other times you’ll lose cards, affiliations, or even die.

Death in Marvel Munchkin is rather rare, but it can happen if other players are out to get you or if you have inordinately bad luck. Dying means that all other players get to take their pick of one item from your collection, even if it was in your hand. The rest is discarded except for any affiliation or power cards you have. Your rank will also remain the same.

When you draw from the Door Deck, you might get a Power. These useful cards serve as bonus points to your overall score. The catch here, though, is that each power card has a rank. That rank can never exceed your current rank on the ID card. So if your total rank on the card is four, you could only have one of the above cards equipped.

You might have to hold on to that Super Strength until later when you’re strong enough to use it.

Lastly, you might get an Affiliation card, which means you can choose to be a proud member of a team like the Avengers or the Inhumans. It’s a category of its own and does not count as powers, gear, or allies. Each affiliation provides two unique abilities that will remain with you as long as you stay with them.

If you enjoy the game, there’s also a handful of expansion decks (Mystic Mayhem, Deadpool, X-Men, and Cosmic Chaos) which will add tons of crazy mischief like extra infinity stones, dungeons, and magic, as well as more gear, powers, and allies.

That wraps up the basics! Kick down a door, fight an infamous Marvel villain, and try to keep ahead of the competition. Succeed and you just might be the next Director Nick Fury. So get out there, True Believers, and start climbing the ranks.

Avengers 4: If this plot theory is correct, it’s totally insane!

This is how our heroes could defeat Thanos