Let’s be honest, sometimes it’s really hard – infuriating, even – to get Apple apps to land in a folder on your phone. Try as you might, the folder you’re aiming for keeps juking away from the program you want to move: it slides onto the next page, goes up a line, moves aside, and falls back. Every. Time.

Yeah, this gets us all super frustrated.

If you’re tired of this issue and want to get your app to its destination a little quicker, we’ve got a few suggestions for you; tricks that will make it far easier to work with, and save time (every time).

How to easily put an iPhone app in a folder

If you’re wondering how to work with iPhone apps in general, here’s the quick rundown on how to get started:

To begin moving/deleting apps, hold your finger down on any app for a few seconds. Soon enough, gray “x”s will appear beside your apps and they’ll begin wobbling:

Now, you can tap any gray “x” to delete an app, simple as that:

You can also move apps by holding onto them (we’re sliding Boomerang around). If you put it over another app, you’ll create a folder. If you put your app over an existing folder, it’ll join the stack:

And finally you can rename their folders while this mode is activated:

Now, let’s get back to the main event: issues with folders.

As we’ve said: while in editing mode, you may often find it hard to put apps into folders. One of the main issues can be the location of the folders themselves:

When a folder lies at the edge of its row, you may continually displace it down a level while fruitlessly trying to get your app to land inside. This problem will be multiplied greatly if you have it located at the bottom of the entire page. In this situation, the folder can jump back and forth erratically:

To make things easier, go into the app editing mode and move it to the center of its row, preferably second from left. Now that it can’t jump very far, it shouldn’t be too difficult to land the app after some trial and error, even if the folder eludes you for a while:

Of course, if you want to make things even faster…

Method 2: The angle of approach

Modern technology occasionally plays by interesting rules. Apple folders, for example, measure their spacial relationship with the app you’re moving to judge whether they should accept the incoming program or move away and make space.

Here’s the secret: it will always move away if your app comes from the side.

Instead, bring your app on top of the folder by approaching directly above or below; this greatly increases the odds that your app will be absorbed! 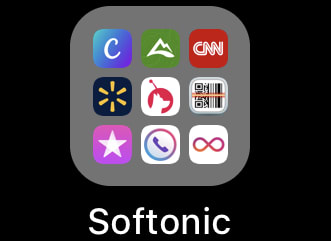 If you can use this method alone, we recommend it: you’ll save a lot of time when organizing your iPhone’s pages. Of course, if more help is needed, use both methods in conjunction to ensure painless efficiency.

These concepts are simple, which could be part of the problem: Apple probably assumed a small detail such as this wouldn’t be worth a footnote. However, modern users often have multiple pages of apps to personalize, which means little issues like this can become far more annoying than expected. But now? You now have a quick guide to fix it!