Apple Music launches on June 30th 2015, a streaming music service entering an already crowded market. Can Apple make use of its huge iTunes user base and become a success?

We expect Apple Music to be a good listening experience, as Beats Music on which it is based already is. It’s pricing and features puts it on a par with existing streaming services, and Apple is clearly pushing expert and artist curation as its unique selling point. 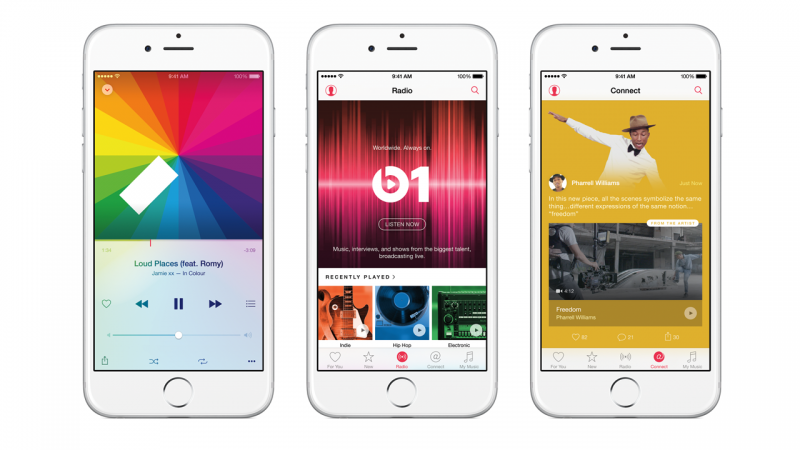 Do you want to get closer to artists?

Many artists already connect with fans via social media: Facebook pages, Twitter and Tumblr. Will these artists be willing to do the same in Apple Music? This will hinge on whether Apple really does let artists connect in an unfiltered and unedited way, but this seems a little unlikely, as Apple always aims to be a family friendly place. Browse artist’s Tumblr accounts for a few minutes and you’ll quickly find things that are at the very least not safe for work!

Another reason to be a little skeptical is the description of Connect: artist profile pages, with feeds of content they have shared. The first thing that popped into my head was ‘MySpace‘, which tried the same artist curation trick when it was relaunched in 2013, a relaunch that was not a big success. In 2010 Apple launched Ping for iTunes, which was an attempt to combine social networking and recommendations, allowing you to follow artists. It was closed two years later, having failed to ignite users’ interest.

Spotify seems to have the social part right – having a community of your friends in the service works really well. You can see what friends listen to, share and collaborate on playlists. While Apple Music aims to get you closer to artists, Spotify is a personal and social experience.

I am sure Apple Music will be popular, if nothing else because 800 million people already have iTunes accounts, and signing up will be extremely convenient for all of them. But I can’t see it immediately stealing from Spotify, which many people already love, and have established connections and ties.

We like to think about winners and losers, but the reality is that there is space for more than one streaming music service, and Apple Music looks poised to be a major player. It can exist without beating Spotify, as Spotify can continue to exist even if Apple Music builds a bigger user base.

What is Apple Music?