Fortnite: Clues about the Cube

Fortnite players, rejoice. The Cube has arrived. If you’ve played Fortnite within the past few days, you’ll likely have noticed what looks to be a massive purple cube located in the southeastern corner of the map, between Fatal Fields and the very edge of the Paradise Palms desert. No, this isn’t some kind of glitch. It really is a giant purple cube.

So, what do we know about this cube so far? The mystery cube appeared on the map several days ago, after lightning strikes that had been appearing around the Fortnite map finally manifested into one giant strike that brought us the cube. If you missed the in-game event, you can check out footage in the video below.

This isn’t the first live event in Fortnite. Last season’s missile launch was the first such event, and opened the rift that came to define Season 5. It stands to reason that this mystery cube is following suit, and will have a big role to play in Season 6. Its role remains a mystery, but we have a few guesses.

Clues to what’s in store for Fortnite Season 6

Firstly, the cube is moving. The cube makes a single turn roughly every 1 hour and 40 minutes or so, and it’s still moving. If you hop in the game at the right time, you might be able to catch it yourself. If you can’t wait, some players have captured footage of the event below:

So we know that this monolith is heading somewhere, but the question is where? Based on the cube’s trajectory so far, the two leading contenders seem to be either Tilted Towers or Dusty Divot. Tilted has long been the subject of end-of-season rumors. In Season 3 it was rumored to be the location where the meteor would hit, and in Season 4’s finale, it looked to be the target of the missile strike before the Time Traveler intervened. So far, Tilted has remained unscathed, but it appears that the cube might be headed that way. Perhaps this means Tilted Towers is finally in for a big change of some kind.

Fortnite: How to survive Tilted Towers

Dusty Divot is also a top contender for the cube’s final destination. Whatever the cube is, it seems to be extraterrestrial in origin. Could it somehow be related to the meteor that struck Dusty Divot? This seems like a pretty strong connection, but that begs the question: what happens when the cube finally arrives at wherever it’s going? 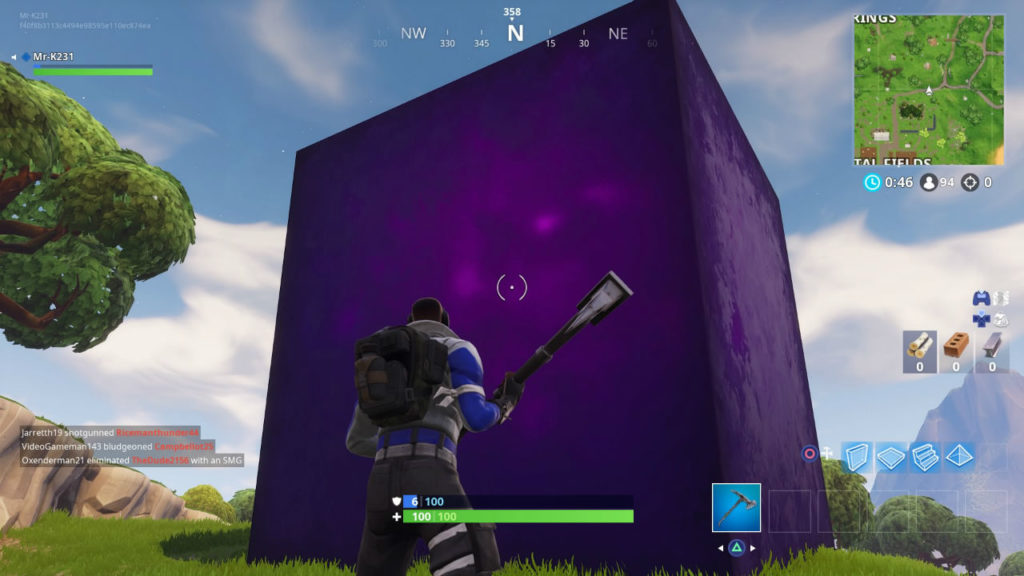 The cube itself seems to have some kind of mysterious power. If you get near it, you’ll see your screen distort momentarily as you enter some kind of forcefield, and your shields will begin to slowly fill if they aren’t already at full. We’re guessing that this shield refill will become a gameplay mechanic in the next season, like Season 4’s hop rocks and the Season 5 rifts.

The cube also emits a constant low-level pulsing sound that reminds us of Dead Space’s marker or the monolith from “2001: A Space Odyssey.” It’s a rather ominous effect overall, especially when coupled with the mysterious glyphs that ripple across the cube’s surface every few seconds. You can see these glyphs in the screenshot below. 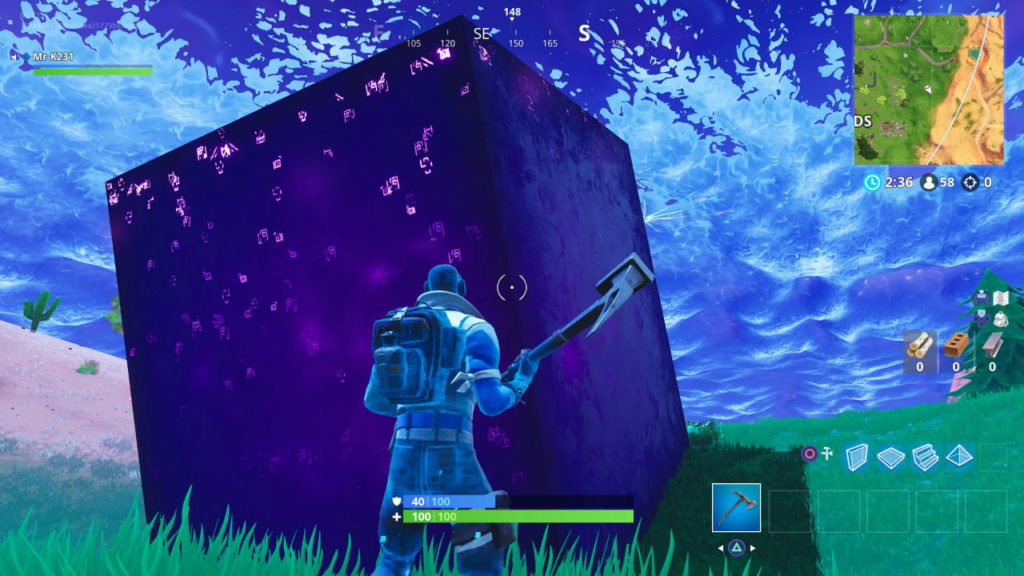 The cube is apparently impervious to damage, and if you touch it, it will launch you back in a manner similar to a jump pad. Players should use caution, though. Repeatedly attacking the cube will cause it to zap you with a lightning strike that can do some serious damage. Landing on top of the cube will cause you to bounce repeatedly like a trampoline, but each bounce will get higher and higher before you’re finally launched away in spectacular fashion.

We don’t know much about this cube yet or what the swirling purple void within might contain, but we do know that it means something big is in store for Fortnite Season 6. We’ll be keeping a close eye on the mystery cube as it makes its slow journey across the map, so be sure to check back with us for more updates on Season 6 and the cube.