How gaming can help cure diseases

A great story emerged this week to prove that online gaming need not only be about blowing-up people in a war zone or getting lost in virtual worlds of orcs and monsters. Online gamers using Foldit have deciphered the structure of an enzyme of an AIDS-like virus that had stumped scientists for a decade – in just three weeks! 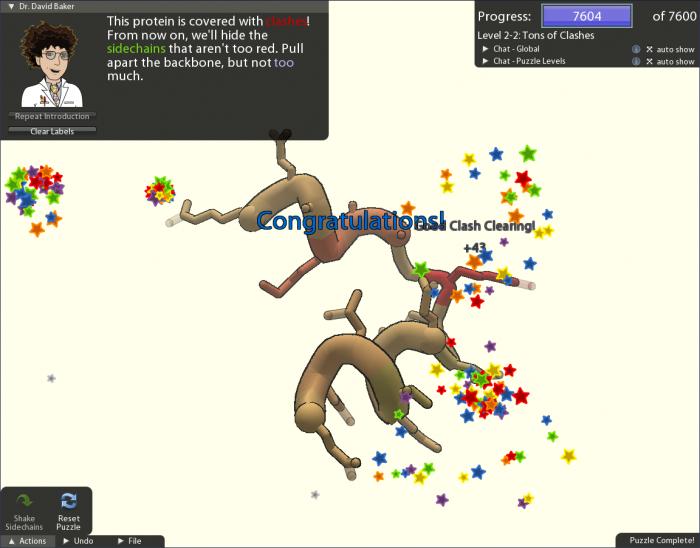 The findings have been published in a medical journal where for the first time, both gamers and scientists will be named as co-authors. Scientists could only look at a one dimensional image of the enzyme under a microscope . To find effective drugs that can target the enzyme they need to view the molecules in 3D – which is where gamers and Foldit provided the ingenious solution.

Foldit (available for Mac and Windows) challenges participants in a race against time to unfold chains of amino acids. Participants managed to produce an accurate model of the enzyme in just three weeks.

In a press release, Firas Khatib of the university’s biochemistry lab said:

We wanted to see if human intuition could succeed where automated methods had failed. The ingenuity of game players is a formidable force that, if properly directed, can be used to solve a wide range of scientific problems.

People have spatial reasoning skills, something computers are not yet good at. Games provide a framework for bringing together the strengths of computers and humans. The results in this week’s paper show that gaming, science and computation can be combined to make advances that were not possible before.

It’s a heart warming story and makes you wonder – if only Einstein had played Foldit, imagine what he could have achieved!

How to Add Text to TikTok in 5 Easy Steps