Linux is one of those things that most general PC users stay clear of because traditionally it has been viewed as intimidating to setup and use especially when it comes to installing external components. Nowadays, that’s not really the case because the most recent releases of Linux distributions are the most user friendly ever.

Still, for many users it’s still a no go area as they stick to the more familiar confines of Windows – better the devil you know. However, did you know that you can enjoy all the benefits of a Linux environment without installing it courtesy of Ulteo? Ulteo is a virtual desktop that allows you to run Linux applications in a Windows environment. You’ll have to sign-up for an Ulteo account to synchronise data stored on your hard drive with Ulteo but once done, it’s a surprisingly powerful and useful way to run Linux without installing it. 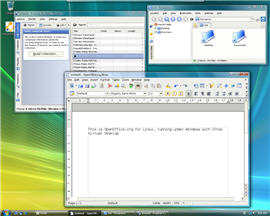 Ulteo comes preinstalled with all the major tools you need to work and surf the internet and is intended as a replacement for Windows. Amongst the packages you receive are Firefox, OpenOffice (that can now work with MS Office 2007 and 2008 documents), KPdf to deal with your PDF documents, Kopete (a cross-client instant messenger), Skype, Thunderbird, Enigmail, Gimp and Digikam to manage your pictures and Inkscape and Scribus to create great graphics and DTP projects. It’s a genuinely exciting package filled with open source applications that are easy to use and won’t bug you with ads or registration requests.

All you need to get going is a web browser with Java enabled – if you’re a regular user of both Linux and Windows, then Ulteo is definitely one way to make switching between the two easier than ever.