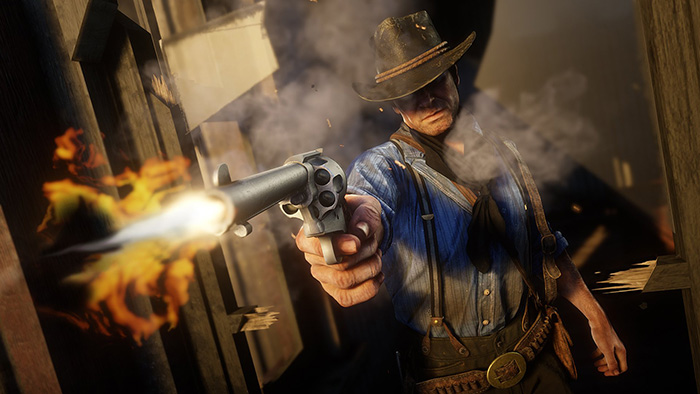 The massive world of Red Dead Redemption 2 is packed full of secrets and easter eggs. For adventurous players, a number of unique hats and masks are scattered in remote locations throughout the world, including everything from cat skulls to pirate hats. Follow our guide below to get your hands on all of these unique pieces of headwear.

The Pagan Skull mask is located near the very western edge of the map, in the wilderness past the small tourist town of Strawberry. As a note, the area is infested with bears and wolves, so make sure you’re well armed before riding out.

Riding out to the location, you’ll come across this peculiar ritual circle, where you’ll see this bleeding corpse mounted on a stake. Approach the corpse to grab the Mask off of it, and check out the rest of the ritual to find a sketching opportunity and some Valerian Root.

The Mask itself is a rather chilling cow skull, with one of the horns snapped off. You’re sure to strike fear in the hearts of your enemies while wearing this macabre item.

To find the Cat Skull mask, you’ll need to ride to the abandoned settlement at Lakay, found deep in the bayou north of Saint Denis. The gang will make their camp here later in the game, so you can also bide your time until you reach that point in the story to make this mask easier to find.

Out at the edges of the settlement, you’ll spot this hut sinking into the swamp. You’ll have to crouch to get in, but you can wade your way through the murky waters to the very back of the hut. There, you’ll find the Cat Skull Mask hanging on the rear wall, yours for the taking.

The Cat Skull appears to be the bleached skull of a large predatory cat, complete with a set of menacing fangs. Green paint marks have been emblazoned on the skull’s forehead, and probably have something to do with the creepy rumors you can overhear about Lakay.

To find the Pig Mask, you’ll have to ride to the northeast region of Roanoke Ridge. Once there, head to the town of Butcher Creek, located on the banks of a river due east of the Van Horn Trading Post.

Once in town, head to the town center to discover a very bloody butcher’s stall. You’ll see a slaughtered pig hanging from hooks, and from there, you can find the Pig Mask hanging from a pillar nearby.

The Pig Mask is a truly disturbing disguise, and, like the name suggests, it’s the skinned face of a dead pig. Don this bloody mask if you want to look like a killer straight out of a horror movie.

The Miner’s Hat is, as the name implies, located in an abandoned mine in West Elizabeth, on the western side of Big Valley. You can find it marked on your map as Boyle’s Dream, and there’s a dirt path you can ride all the way to the mine.

Once you make the climb up the path into the mountains, head inside the mine entrance, pictured above. Just inside, you’ll see a dynamite plunger and receive a button prompt to press it. The explosion will blow a hole in a rock pile at the end of the tunnel, allowing you to crouch through and explore inside. Keep your lantern handy, because it’s dark in there! Eventually, you’ll stumble upon a miner’s corpse and you can grab the helmet and a unique knife from his body.

The Miner’s Hat includes both form and function: the burning headlamp actually works to illuminate areas. This means you won’t have to keep your lantern in one hand if you’re in dark areas, leaving both hands free to dual wield or use two-handed long guns.

Head to this small farm just east of Emerald Ranch to start your hunt for the Scarecrow Hat.

Once at the farm, you’ll see this single lonely scarecrow in the middle of the cornfield. Retrieving this hat is a bit tricky. You’ll have to shoot it off the scarecrow’s head to grab it, and it can be hard to spot in the fields. The gunshot will also turn the ranchers hostile, so be ready to either run or engage them in a gun battle.

The Scarecrow Hat is a wide-brimmed, rumpled brown hat. It looks like it’s seen better days, but makes a good addition to any old salt gunslinger’s wardrobe.

Maps to find all secret melee weapons in Red Dead 2

The Hardee Hat is part of a cache of Civil War goodies located at Fort Brennand, an old Civil War fort north of Saint Denis. Once you arrive, head inside the fort’s walls and look for a low building inside. In the back corner of this building, you’ll find a trap door leading to the basement. The Hardee Hat is in the rearmost corner of the basement, but you can also find a unique knife and a gold nugget amongst the loot.

The Hardee Hat is a classic Civil War officer’s hat. Done in Union blue, it features a turned up brim, crossed cavalry sabers, and a rather jaunty feather tucked in the hatband.

The Nevada Hat is deceptively difficult to retrieve. First, head up north to the location marked above. It’s at the edge of Window Rock. You’ll want to come at this location from behind, since the hat is located in a cave near the top of the waterfall.

Once you’ve arrived, start carefully making your way down the cliffs. It can be very easy to lose your footing and fall here, so go slowly as you make your way down the rocks and behind the waterfall. The hat itself is sitting on a rock within this cave, and picking it up will reveal a note explaining how it got there.

The Nevada Hat is a rather handsome black gambler’s hat in almost pristine condition, befitting of the actor it once belonged to.

The Tricorn Hat is located on an island off the coast of Leymone, east of the town of Rhodes. It’s easiest to get there from Clemen’s Point, where the gang makes its camp in one of the game’s early chapters.

Once you’ve made it down south, ride along the coast and get your hands on a boat. You may be able to find a few on the shore, or you could take the black hat route and kill a passing boater to steal theirs. Just make sure you don’t accidentally shoot any holes in it. Next, row out to the island, and you’ll easily spot this old, crumbling shipwreck. Make your way inside and you’ll find the Tricorn at the rear of the boat.

The Tricorn itself is classic headwear for any aspiring pirate or Revolutionary War era soldier. We recommend pairing this with the Broken Pirate Sword for a look worthy of any Wild West swashbuckler.

How to find the rare White Arabian in Red Dead 2

Up near the northernmost point of the map, you can stumble across a Viking burial site tucked in the woods of northern Roanoke. It’s just off the main road, so the location itself shouldn’t be hard to find.

The burial site itself is quite expansive, including a sacrificial altar and several tunnels filled with old bones. It’s in one of these tunnels that you’ll find the Viking Helmet tucked alongside several skulls.

Once you don this helmet, you’ll be fighting with the power of Odin himself. The set isn’t complete without the unique Viking Hatchet you can also find at the burial site, so be sure to grab it before you leave.

You’ll have to make a bit of a trek to get to this one. The Morion Helmet sits atop the snow-covered peak of Mount Hagen in the Grizzlies. Make sure you have a winter coat before you head out. To make this one a little easier, simply drop a map marker over the “M” in Mount Hagen.

Take it slow as you ride up the mountain. The path is treacherous, and it’s very easy for you or your horse to fall. Near the mountain’s peak is an abandoned home. Leave your horse and head slightly past this landmark. You’ll have to climb around the rocky peak to spot this frozen corpse leaning against a rock.

The corpse appears to be of a colonial settler, and this helmet seems to back that theory up. It’s an old helmet in the style of the pilgrims or conquistadors, with a brilliant red feather inserted at the top.

Now that you’ve upped your style game, you’ll have some unique additions to your wardrobe as you tear your way across the Wild West. Ride in style, cowboy.