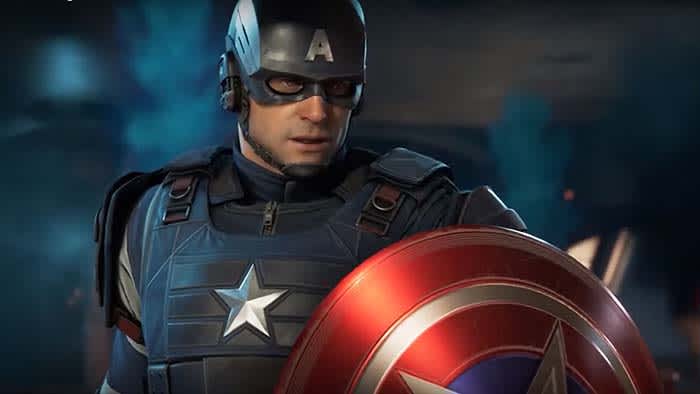 If you were looking for a reason to buy a PlayStation 4, this might be it!

Square Enix has released the first trailer for Marvel’s Avengers where you save the day as Earth’s mightiest heroes.

Did… Did Cap just die?

Come on Marvel, we are still getting over Iron Man‘s death in the MCU.

The game starts during a celebration of the Avengers. While unveiling a new high-tech headquarters, an explosion causes the Avengers to take action. While fighting off bad guys and tanks, Captain America jumps aboard a helicarrier to dispatch baddies. However, a massive explosion not only causes massive civilian casualties but the death of Cap himself.

Is Cap going to stay dead? Well, we don’t think so. Cap has died in the comics before and has come back. Also, it appears as though you do play as Cap at the beginning of the game, so we don’t think the game developers would create unique fighting mechanics for Cap, just to not have him in the game later.

In the game, you appear to play as Iron Man, Hulk, Thor, Black Widow, and Captain America. There are no signs of other Avengers like Hawkeye, Doctor Strange, or Spider-Man.

However, this does provide an opportunity for lots of DLC.

With the huge cast of Marvel characters, we would love to see all of these characters join the fray to help save the world.

What’s gameplay and what’s a cut-scene?

The trailer does not specify what is actual gameplay and what is a cutscene. Scenes of the Avengers talking together or doing very cinematic scenes are probably cutscenes, but most of the combat looks like genuine gameplay. However, we will have to wait for the next trailer to know for sure.

In order to make a great Avengers game, you need a great cast of actors and actresses. Luckily, Square Enix has given us an absolutely stunning array of voice actors.

You probably know Nolan North best for voicing Nathan Drake in the Uncharted series. Troy Baker has quite the resume himself including the voice of Joel from The Last of Us and Booker Dewitt from Bioshock Infinite. Laura Bailey has provided the voice for Black Widow in several animated Avengers shows. She also voiced Mary Jane Watson in Insomniac’s Spider-Man game. Travis Willingham has been providing the voice for Thor in animated series for years. Jeff Schine has provided voices for Kingdom Hearts III, Red Dead Redemption 2, and Just Cause 4.

If this is half the game Marvel’s Spider-Man was, then we are in for a treat. We are already excited for Ultimate Alliance 3, but this might just be even better!