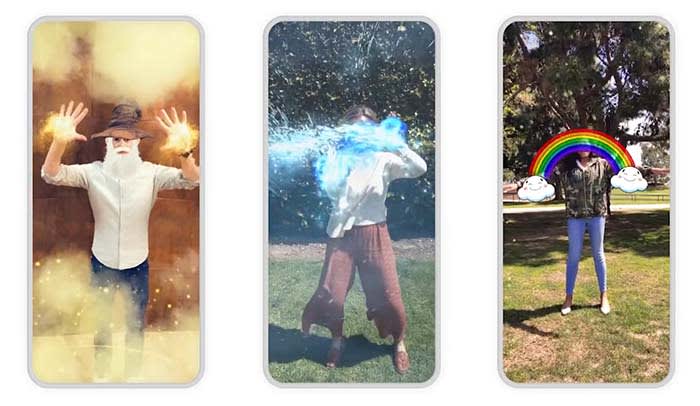 Snap CEO Evan Spiegel just announced a whole host of updates that prove that Snap, the company, is gearing up for an expansion that extends well beyond Snapchat, the app.

Spiegel made the announcement at the company’s first partner summit, telling the audience that new AR features, original content, integrations, and even a Snap-powered ad network were about to launch.

Clearly, Spiegel is hoping for a comeback, one that positions Snap as a serious Facebook competitor. Here’s a look at some of the announcements:

Snap’s new augmented reality experience comes with a range of tools that allow the use of augmented reality tools. As is the case with Google’s ARCore and Apple’s ARKit, the basis of the AR suite revolves around your phone’s camera and lens.

Here’s a quick rundown of what you’ll find inside:

Scan is Snap’s new camera search function. It’s not quite a camera-powered search engine. How Scan works is, users press and hold the Snap camera screen and the app will present them with a selection of “relevant experiences” based on their environment.

Scan is also designed to read snap codes, bar codes and products to make purchases on Amazon and users can scan their environment to learn more about music playing with a Shazam integration.

The Snapchat Lens Studio has been around since 2017, but they’ve added a few things to flesh out the platform.

The Lens Studio now includes a template called Landmarkers, which allows users to transform the world’s landmarks into AR creations (not sure why we need this, but OK).

Other templates include body tracking, pet tracking, and hand tracking — all work the same way — you’ll create AR overlays that track with the aforementioned elements.

Soon, users will be able to create Lens Creator Profiles, which Snapchat says is a new platform for “building an audience” and sharing your Lenses.

The platform also includes something called Photomath. Users can take a picture of their math homework or a receipt and get an answer in return.

Snapchat has announced Snap Games, which is similar to Facebook Messenger’s Instant Games, a mix of ported HTML5 versions of arcade games, in-house originals, and new offerings from Zynga and ZeptoLabs.

According to TechCrunch, the gaming platform stands to increase the amount of time users spend inside the app, which allows them to boost their revenue stream through ad views.

One reason that Facebook has been able to attract and retain so many (billions!) of users is, Mark Zuckerberg has long embraced third-party app makers. Snapchat’s Spiegel, not so much.

Snap is finally changing its tune and they’re gearing up to compete with Facebook.

Snapchat plans to let apps like Tinder, Houseparty, incorporate elements of their technology into outside apps.

Snap is doing a lot… will it help them grow?

Snap is changing up their approach to making money. Instead of focusing on growth, the company is working to monetize the users they have.

While Snapchat still has a stable user base, there has been no shortage of rumors swirling around the web — predicting the app’s demise.

Still, Snapchat already has some distinct advantages over the competition. And these new features could be a big win for Snap. They have games now! They’ll do your homework! And there’s more…

They’re also developing an ad platform to get in on the big tech business model.

Instead, they plan on selling ads that appear inside other companies’ apps.

Snap Audience Network is similar to Facebook’s Audience Network, which allows apps developers to sign up for the program and provide space for advertisers to display their ads.

Because the platform has stopped growing, Snap is partnering with other companies to bring more value to advertisers — widening the number of people who might see the ad. This makes sense, as they definitely can’t compete with Facebook’s massive audience-targeting tools.

That said, companies concerned with Facebook’s privacy ethics might be attracted to Snap. The company has repeatedly stated that their developer partners do not have access to Snapchat users’ personal data.

Instead, only Snapchat display names are shared with companies when a user links their account to a third-party app.

It’s worth pointing out that targeted ads depend on user data, so advertisers might not get the same return on ad investment with Snapchat as they might when they advertise on Instagram.

It remains to be seen whether Snap will rise to the level of Google and Facebook and emerge as a serious competitor.

According to CNBC, Snap stock rose following the announcement, yet a lack of growth remains a concern.

That said, Snap is putting its eggs in as many revenue baskets as possible. Perhaps at least one will hatch into something that will save the platform.