If you don’t come out of a Spider-Man movie and immediately have the irresistible urge to crawl up the nearest building and swing through the streets of New York, then you’re not watching the movie correctly. Getting to play as any superhero is a dream come true, but there’s always been something special about Spider-Man. Maybe it’s the freedom of movement, maybe it’s his snarky quips, or maybe it’s the rogues gallery filled to the brim with colorful and largely unique villains. Whatever the reason, you’re not alone in wanting to swing from building to building as the amazing Spider-Man! Luckily game developers feel the same way, and there’s been no shortage of incredible Spider-Man games put out over the years. But which ones do the best job of really capturing what it’s like to be the wallcrawling webhead? We’ve assembled a list of our top 10 picks. 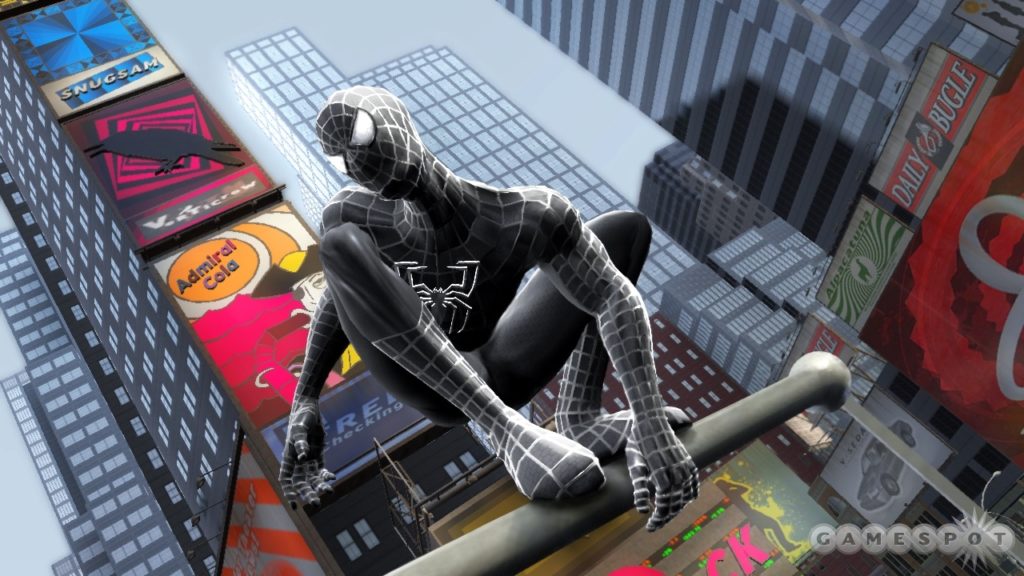 Released in 2007, this game is based off the movie by the same title. Unfortunately, like its movie, this suffers a good number of pitfalls and facepalm moments. It’s not all bad, however. The graphics are decent, the combat is (for the most part) refined from its prequels, and you’d be hard pressed to find many games that offer the freedom or the mobility that this game’s got covered from square one.

As you can probably tell from this video, the controls are … clunky. It’s the main reason this game didn’t place higher on our list. The idea to make dodge a button-hold was odd, and the missions were plagued by obnoxious quick-time events and irritatingly difficult boss fight mechanics. We have to say, though, that failing the quick-time events was almost worth doing at least once; the results were hilarious. 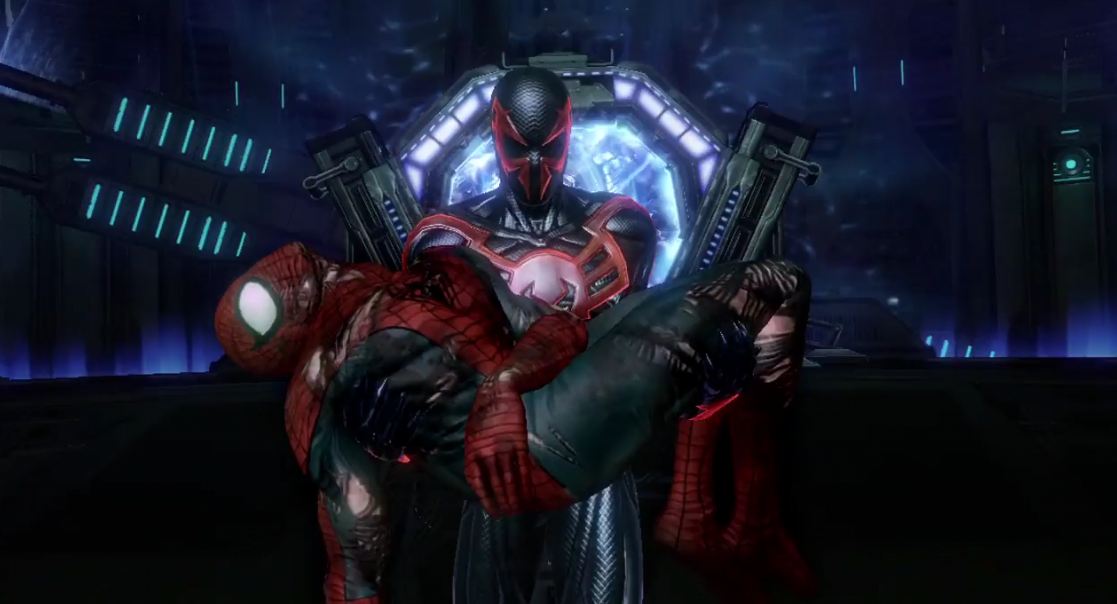 Developed by Beenox and Activision, Edge of Time was a very unique take on a Spider-Man game that added elements of time travel to its plot. When a game begins with Spider-Man 2099 stumbling back in time to find a dead Peter Parker, you know you’re in for a wild ride. Despite its dark opening, the game does manage to capture the trademark snarky humor and self-deprecation that we know and love in our webslinger, and there’s a lot of good dialogue between the two Spider-Men while they try to piece together a solution to the crazy tears in reality they encounter.

The reason this game wasn’t better received was more because it was considered a sequel of sorts to Shattered Dimensions, and didn’t exceed or even meet the high bar that the previous game had set. GameInformer went so far as to say that the game was “a major step back from the formula that worked.” Generally disliked by the critics but enjoyed by the gamers, we definitely think this game is at least worth one playthrough for its story alone. 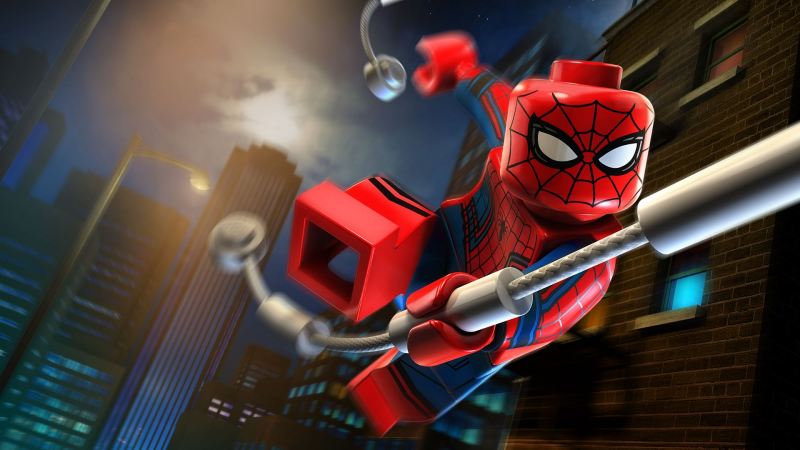 Not a Spider-Man game per se, but we’ve got to give credit where credit is due. Spider-Man in this game is pretty sweet, and is one of the MANY playable characters in this title. We’ve got to say he plays pretty flawlessly. The movement is intuitive and visually striking, his controls are logical, and as far as interaction with the environment this game actually has more of it than any title on this list (it’s a lego world – practically everything is destructible!)

Of course with so huge a roster, you’re not going to be seeing Spider-Man get a ton of unique moves or animations, and that’s to be expected. Much like a movie where you’ve got a massive cast of characters, not everyone always gets the attention they deserve. So maybe not the best game when you’re really feeling like playing Spider-Man specifically (you’ll probably get bored after a while), but we can’t complain about what’s there! 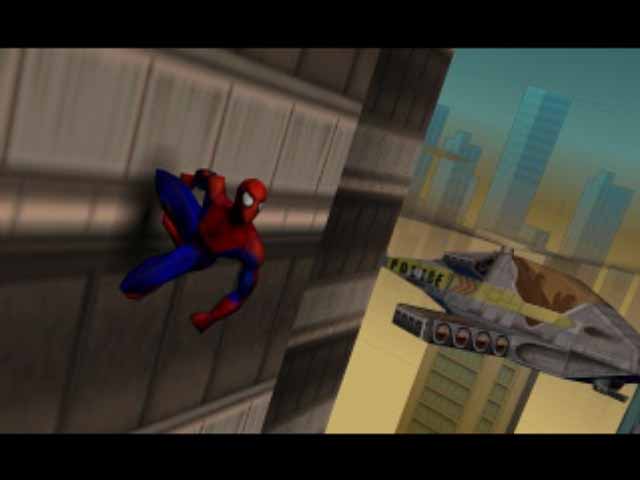 An oldie but goodie, this game isn’t a sprawling free-roam web-swinging fiesta like a lot of the others on this list, but this game earns its place for a different reason: Story and character. Released in August 2000, Spider-Man was the first time we got a Spidey game in 3-D, and while graphics and gameplay have come a long way since this title, it’s got it where it counts.

Narrated by none other than Stan-the-man Lee, this game takes Spider-Man through a fiendish plot brought about by the nefarious Dr. Octopus, and features numerous fully-voiced encounters and cameos with a number of Marvel heroes and villains: Daredevil, Black Cat, Venom, Mysterio, Carnage, Rhino, and a TON more. The best-captured character here is the most important: The webslinger himself – playing the good guy in a city that thinks he’s a menace, Spider-Man swings around lamenting his incredibly bad luck … but is always quick to throw out a joke. This game captures what we love about Spider-Man comics and just plain tells a great story.

Turning the often-frustrating Marvel multiverse into a strength, Beenox and Activion’s 2010 Shattered Dimensions featured four different Spider-Men, each with a distinctly different gameplay and art style, and each fully voiced by previous Spider-Man actors like Neil Patrick Harris. Switching between the classic Amazing Spider-Man, the stealthy Spider-Man Noir, the futuristic Spidey 2099, and the symbiote-wearing Ultimate Spider-Man, the game’s four distinct styles meant that everybody got to choose a favorite.

Anddd it also meant that everybody had a least favorite. While the game was generally fast-paced enough that players didn’t have to spend too much time with any one Spider-Man, critics complained about the title’s odd choice of villains and the numerous technical difficulties it sadly suffered. Still, though, this is a really unique idea for a game. Good on you, Beenox and Activision.

The first Spider-Man game to be based on a film, Spider-Man boasts a big visual improvement from the 2000 Spider-Man game, and gave us a title that was challenging but fair, cheesy but engaging.

The first game of its kind to feature and encourage open world exploration,  Spider-Man also had a fully-implemented combo system, complete with a variety of web abilities and acrobatics. It still had a long way to go in terms of balancing and difficulty spikes, but the game was innovative and did a great job of adapting the film into a playable adventure.

This title takes Spider-Man through a nightmarish scenario wherein the Venom symbiote gets out of control in the worst way possible, infecting his friends and enemies, and then the entire city. If you ever wanted to see play as Spider-Man during a zombie apocalypse, this is the game for you.

The game allowed the player to seamlessly switch between the classic red and blue suit and the black symbiote, both of which dealt with combat completely differently. The red and blue played like you’d expect from Spider-Man, while symbiote offered more violent and ruthless combos and abilities. The game also featured extensive wall combat, a cycle of companion followers, and a neat web yank mechanic that … may have become a little TOO overused. Unusually enough, it also had dialogue choices and multiple endings, giving it a uniquely modern non-linear style that we don’t typically see in our Spider-Man games. Worth a look for sure. 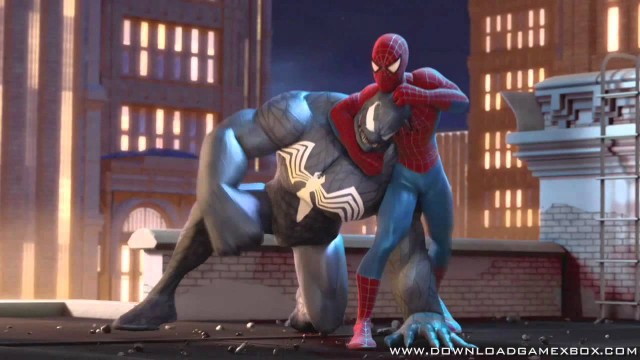 This 2007 release by Activision is a complete 180 from our number 4 pick. Fun, cartoony, and kid-friendly, Spider-Man: Friend or Foe is a great simple game that really hits its stride when played with a friend. The selling point of this game is that when a villain is defeated (and there are a lot of them to choose from!), player two then gets to play as them on future missions, lending to some pretty funny dialogue and some unique moves and combos.

There were two things that were particularly great about this game – it’s intuitive, pick-up-and-play controls; and the unique mechanic that allowed players to romp around as the infamous villains of Spider-Man’s universe. It’s one thing to shoot webs and swing around, but it’s pretty special being able to play as Sandman, Scorpion, or Green Goblin!

Fast-paced, humorous, stylized, and liberating, everything about this game looks and feels like you’re living a Spider-Man comic. There’s no other game on this list that better captures the way Spider-Man moves, swings, and fights – and it’s all in a huge, free-roam world where the entire city is accessible from start to finish. We honestly can’t speak enough praise about how much this game nails the feel of the Ultimate Spider-Man comics. Even the cutscenes play out like you’re reading a comic strip.

The game’s story was actually split between Spider-Man and Venom, the latter of whom is excitingly fully playable and as powerful as we think the character should be. Getting that extra perspective and altered gameplay did a great job in keeping the game fresh and fun. There were some annoying quick-time events and the boss fights could be especially difficult, but this is a Spider-Man game that we keep coming back to.

This 2004 game by Activision and Treyarch placed the top in our list because it’s the game that did everything right. With a sprawling free-roam city, a great cast of villains, in-depth combat, skill upgrades, elegant mobility, and a breathtaking fluidity between it all. What brought this all together wasn’t so much the story, which played similarly to the other video game adaptations of the Sam Raimi trilogy. What sold us was the city and the role you played in it.

New York in Spider-Man 2 lived and breathed like no other game on this list, with the possible exception of Ultimate Spider-Man, our number 2 pick. At the drop of a hat, a peaceful swing in the New York sunset could turn into a chaotic rush of petty crimes, car chases, armored car robberies, dinner dates with MJ, and pizza deliveries.

Stan Lee always said the shining feature of Spider-Man as a character was not Spider-Man, but Peter Parker – the unlucky, overworked, underpaid, stressed underdog that resides within all of us. This game did the best job in capturing and balancing both the unbridled liberation and power of Spider-Man, and the somber moral core and responsibility of Peter Parker. For that we think it’s the truest depiction of our favorite superhero.

Agree with our list? What’s your favorite Spider-Man game?