At this year’s E3, Bethesda finally announced the production of the title Elder Scrolls fans have been waiting for since their first starry-eyed playthrough of Skyrim. Since the still-untitled Elder Scrolls 6 is likely years away from our anxious hands, it looks like fans of the series will still be spending a lot of time questing through the previous titles in the franchise. If you don’t already own Skyrim: Special Edition, you can grab it here:

In the meantime, we’ve looked through the bustling community of fans, reviewers, and modders who are still playing Elder Scrolls V: Skyrim today. We were pleasantly surprised to see that by adding these totally free mods the game can actually look pretty close to something you’d see on the market today.

So if you’re hankering to sate your hunger for Elder Scrolls 6, here are 15 free mods that transform this game’s graphics, gameplay, and content into what we affectionately call ‘Elder Scrolls 5.5.’

For the sake of the remaster’s improved visuals and gameplay tweaks, all of the following mods will be for Skyrim: Special Edition, released just this past year by Bethesda Softworks.

How to create and add your own unique follower to Skyrim

These mods were made by the community and the fans. For simplicity’s sake, can all be found for free on nexusmods.com. We also recommend Nexus Mod Manager since it’s both the easiest tool with which to download mods, and also the most user-friendly for uninstalling or editing, both of which can be done at the player’s discretion.

If you are unfamiliar with how to download mods for Skyrim, you can check out our guide here.

Skyrim: Special Edition made some huge improvements to the 2011 game’s visuals, particularly when it came to trees, lighting, water, and weapon meshes. This mod takes the ball and runs with it, bumping the game up to an optional 4k. Obviously, this will only be in your load order if you’ve got a rig that can handle it (and if you find that you don’t, this mod lowers to 2k, 1k, or 512) without big FPS drops or lag.

We think this mod does a terrific job of helping to immerse the player into Bethesda’s gorgeous world, and additionally brings out lots of little features that add up to making the whole experience all the richer.

In the same vein as the above mod by Pfusher, Static Mesh Improvement does a lot of work to make Skyrim look more convincing. A lot of the touches come out in models that were changed to 3-D, textures that have exceptional detail even when viewed extremely close up, and rounding out some of the more jagged edges to objects like ore and other miscellaneous items.

Combine this mod with the 2017 texture overhaul and even the most unobservant of players will be geeking out at how fresh the game’s visuals just became.

The last mod on our list that’s strictly visual might be our favorite. The snow, clouds, and fog are raised to eleven with this gorgeous mod that focuses on adding just that extra punch to Skyrim’s environment. In a game that so encourages wanderlust and exploration, Vivid Weathers breathes life into the land of Skyrim itself, making adventuring much more dynamic and exciting.

Colors and environment effects will have much more ‘pop’ with this mod installed, and honestly, it becomes a real treat for the eyes just going into first-person mode and looking everywhere you can.

Compared to earlier games in the Elder Scrolls series, Skyrim’s magic system was much more streamlined with a higher focus on combat utility. The result was a system that was effective but left much to be desired for players who wanted more variety of spells. Apocalypse magic adds 155 new spells to the game, all of which can be found in loot drops and vendors throughout Tamriel.

The spells here range from volcanoes to mind control, teleportation to extra inventory space, and even a spell that conjures a pot where you can cook your salmon steak. There’s something for everyone and it all scales so elegantly that we often forgot we were even using a modded spell.

Another hugely expansive mod spearheaded by the talented Enaisiaion, Ordinator is a complete overhaul of Skyrim’s perks. Not only does this mean more branching options for each skill tree, but also opens dozens – maybe hundreds – of new detailed ways to build a new character.

This allows for some huge changes to some of the typically less useful skill trees: Smithing allows for the creation of Dwemer automatons; Speechcraft now seamlessly integrates and upgrades the player’s shouts, and even allows for the player to roleplay as a bard! We found ourselves anxiously trying to level up our skills in every which way, with every tree more enticing than the last. A must-have for anyone looking to completely change the way they approach the game’s RPG element. To see just how many changes have been made, check out this in-depth walkthrough:

Our last mod to overhaul Skyrim’s gameplay is another perk mod, this one focusing especially on the mage. Path of Sorcery adds still more perk changes to the mix, as well as a complete restructure of the mage perk trees as a whole. Highly creative and respectfully subtle, these changes do not add any overpowered spells or damage enhancers, but instead focus on rounding out the implications of particular trees, as well as adding logical branches to them.

Conjuration lets players assemble collected bones to make a skeleton army, Restoration lets you choose a divine or Daedric patron. Enchanting lets you to pour a dragon soul into your weapons or armor for added power and abilities. There are some truly dazzling builds you can make with this.

This award-winning mod adds around 60 new sets of armor to Skyrim and hundreds of new equippable items. These items are wearable both by the player and by random enemies throughout the world. None of these are overpowered, and line up alongside the varying durability of other crafting materials in the original game.

All the items from this mod that you find can also be crafted, provided you have the perks and components to do so, and will level up your smithing skill accordingly. This mod also extends to items like earrings, scarves, eye patches, and more, so if there’s an aesthetic you’re going for with your character odds are you can achieve it here. Besides, this stuff looks awesome and breaks up the monotony of fighting a camp of bandits, all of whom are wearing the same gear as the guys from the previous camp.

Much like the above mod, this expansion adds over one hundred new standalone weapons and staves. Like Immersive Armors, Expanded Weaponry makes any of these items craftable at a forge or staff enchanter, and can also be found wielded by enemies or carried in a vendor’s inventory. The weapons are also balanced to match those found in the original Skyrim, which means nothing here is going to be game-breaking.

If you’re looking to revamp your character’s aesthetic, and want a larger element of randomness both from the chests you open and from the enemies you fight, this is the mod for you.

Ars Metallica aims to improve the smithing in Skyrim, and does so by adding several logical features. An incredibly lightweight mod (46 KB) for what it does, Arthmoor has added the ability to forge arrows and the player can now gain skill for both smelting and mining. Armor and weapons can also be melted down at a smelter, now, which means that ore can be re-purposed when your character is ready to upgrade.

We especially like this mod for being highly lore-friendly, and frankly can’t imagine playing Skyrim now without having this intuitive system implemented.

Immersive creatures adds dozens of new monsters roaming around Skyrim’s dungeons and landscape. By your second, third, or twenty-seventh playthrough of Skyrim, you’ve probably memorized not only all of Skyrim’s creatures and enemies, but their spawn locations too. This mod changes all of that.

Lifestorock’s monsters renew the lost feelings of fear and excitement that made our first run of this game so captivating. The creatures level up along with the player as well, meaning that you won’t wind up getting repeatedly defeated by some frustratingly over-powered enemy.

Diverse Dragons adds 28 leveled dragons to Skyrim, putting them in the rotation with the randomly generated dragons on top of mountains or roaming the skies.

Dragons may breathe shadow magic, lightning, energy beams, or even whirlwinds that can knock you off your feet. These do not replace or overshadow the dragons already the game, and named dragons unique to the game will remain that way. Anything that adds some color and strategy to Skyrim at this point is much appreciated, particularly when it’s done so artistically.

Downloaded over a million times and the recipient of over 25,000 endorsements, SkyUI is the elegant menu replacement you didn’t know you needed. This mod cleans streamlines and organizes pretty much every in-game menu allowing for faster access to your numerous abilities and items.

The most appreciated change in our opinion is the new favorites menu, which allows for compartmentalizing and filtering at the player’s own discretion. This is particularly helpful when you’re playing as a mage and want quick access to a wide variety of spells. It also eliminates a lot of the time otherwise spent navigating menus to switch armor, weapons, or shouts. Try it once. You won’t go back.

Skyrim: Special Edition made some masterful changes and enhancements to the original game’s lighting, adding god rays, depth of field, and a variety of new snow shaders. RLO continues in the same direction, highlighting new dynamic light and shadow that makes the game look much more dramatic.

This is especially noticeable in various interiors or at nighttime, and we think it really completes the gritty vibe of the harsh winter in Tamriel’s northernmost peninsula.

In a land predominately covered in tundras and drifts, it seems an oversight not to allow for footprints to come out in the snow. Jonwd7 fixes this oddity by adding footprints that appear whenever the player (or patrols or wildlife) steps in the snow.

Probably the smallest change on this list, we were surprised by how much it bothered us to play the game without this installed. Making the game feel fresh is actually a lot more a culmination of small mods than any one big one, and Footprints is the perfect example. 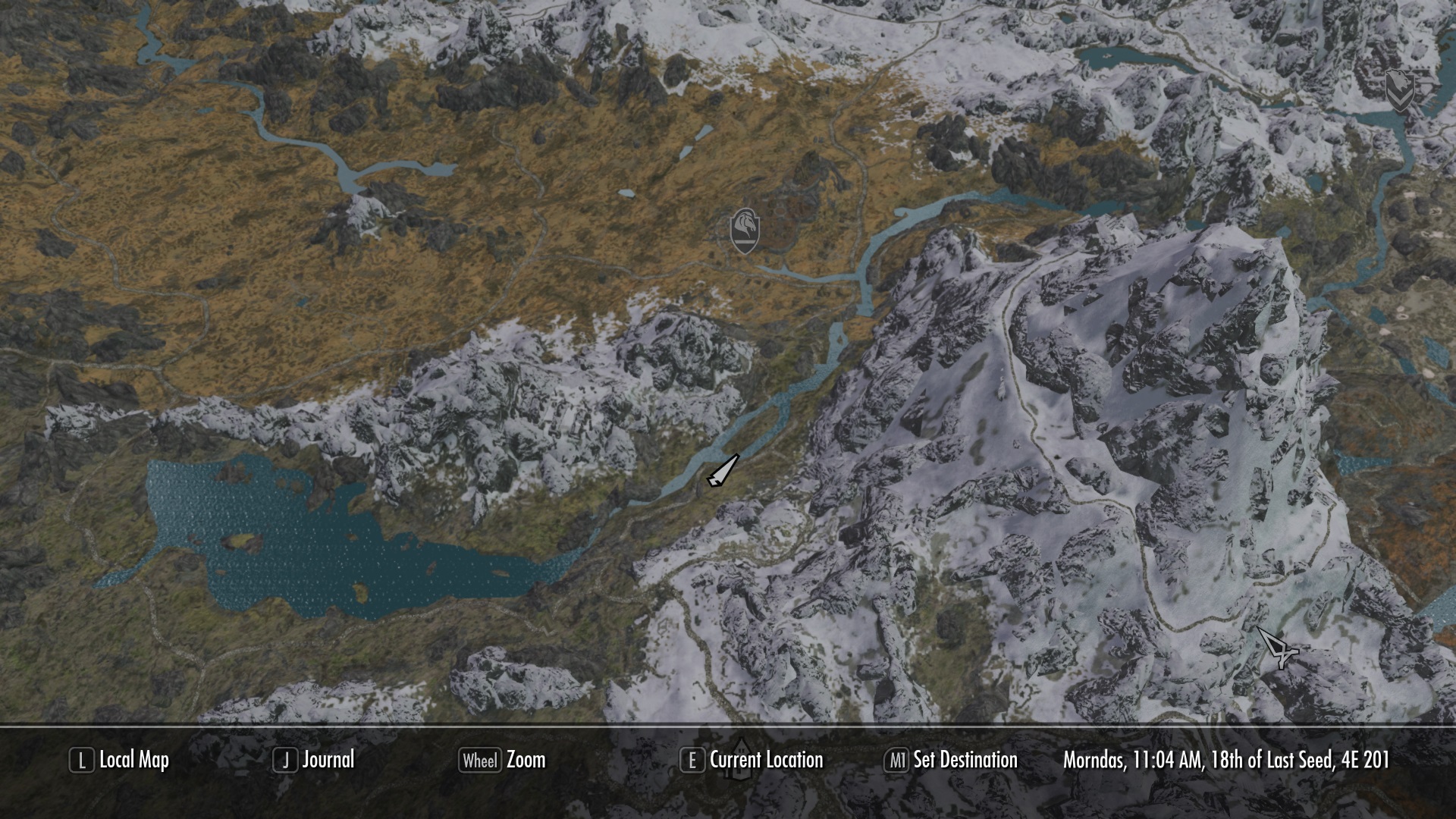 Again, it’s the small things. Play Skyrim and you’ll probably be using the map. A lot. For a screen the player sees so often, having it re-textured and highly detailed is quite refreshing. Not to mention, you’ll find your way around easier.

So there you have it! From small content additions to massive re-imaginings of the game’s core systems, hopefully this list will breathe some life back into Skyrim for a few more playthroughs. At least until Elder Scrolls 6 comes out!

Get up to speed