The Elder Scrolls V: Skyrim has been one of our favorite games since its November 2011 release. After playing it with added DLC and multiple different characters and playstyles, we jumped online to experience the incredibly talented, underrated modding community. Over seven years later, Skyrim still remains an outstanding game and a highly replayable experience (thus all the new editions), but sometimes we’re looking for our game mods to be bigger, richer, and more pervasive in our game.

Don’t have Skyrim? Grab it here:

Below is a list we’ve compiled of five mods that serve to greatly change the Skyrim experience, some of which add new mechanics and gameplay, others that add new quests and content, and one that completely builds the game over again from the ground up. 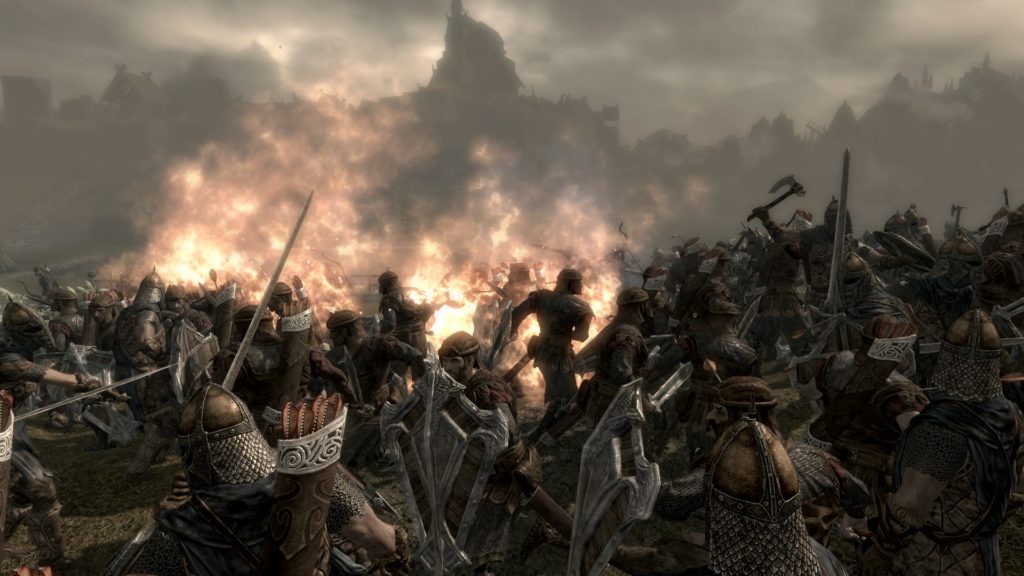 Simtam’s Civil War Overhaul mod affects the Civil War quest line, in which the Dragonborn must choose to aid either the Stormcloaks or the Imperials in a bloody war to determine the governing faction of the region. By default, this quest is started by joining either the Imperials or Stormcloaks in their respective holds, with either General Tullius (Solitude) or Ulfric Stormcloak (Windhelm) leading the charge. 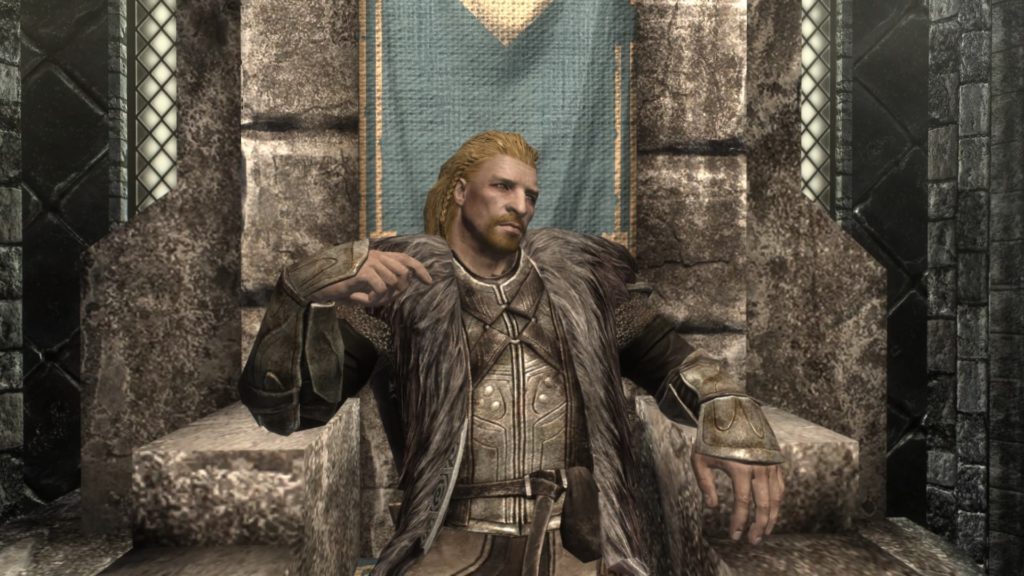 From this point on, the quest line is about laying siege to different hold capitals and forts across the map, trying to gain ground and push back the opposing side. Once a siege begins, it’s just a matter of eliminating enemy units until the fight’s over. Rinse, repeat. There’s really no way to lose unless you fall in battle.

Civil War Overhaul gives the enemy AI a chance to retaliate and stage counter-assaults of their own, attacking holds and cities that were previously owned by your faction. Additionally, any battle that you lose will result in that city being taken by the opposing faction, leading to some new scenarios where cities are under a completely different banner.

Lose a city and you’ll receive a note from a courier saying that a different hold is under attack, and that you must go to defend it. Next time you show up at that city, you’ll be fighting to wrest control of it. 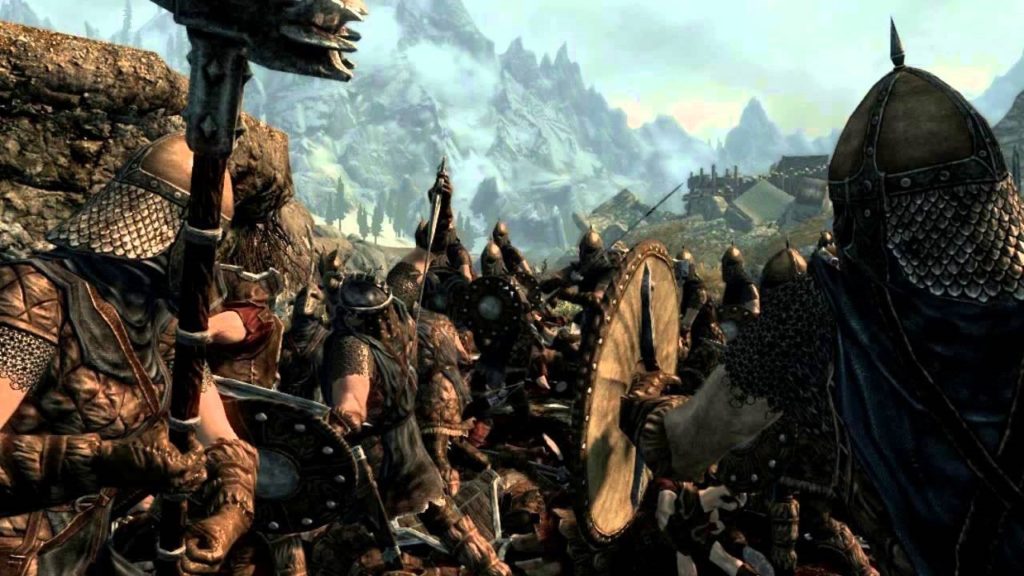 What makes this mod so great is that it primarily uses content like dialogue and scripted events that Bethesda already had in the game – they just never added it to the final product. With this mod, it really feels as though Skyrim’s civil war is more present and you can begin to feel the toll it’s taking on the land. It couples extremely well with another small mod, The Honored Dead, which adds more signs of battle, scattering Stormcloak and Imperial corpses across the lands. If you’ve ever wanted a more gritty, realistic approach to combat in Skyrim then Wildcat is the mod for you. This mod adds a layer of realism to the bloody world, adding injuries to the game and generally enhancing the way combat looks and feels.

While this doesn’t add any new content to the game, Wildcat makes the ever-present bloodbath of Skyrim feel far more intense; both you and the enemies you fight will really feel and act as though they are fighting for their lives, taking fewer risks when they feel threatened, or drinking health potions when injured. If you want to feel like the all-powerful Dragonborn, laying waste to scores of enemies, this mod is definitely not for you.

Rather, Wildcat is catered more toward fans of series like Kingdom Come: Deliverance or Witcher. The damage you dish out and receive is much more evenly distributed, meaning that human enemies will feel like just that – a blow from a sword will cut deep no matter what level it says they allegedly are. It’s realistic. 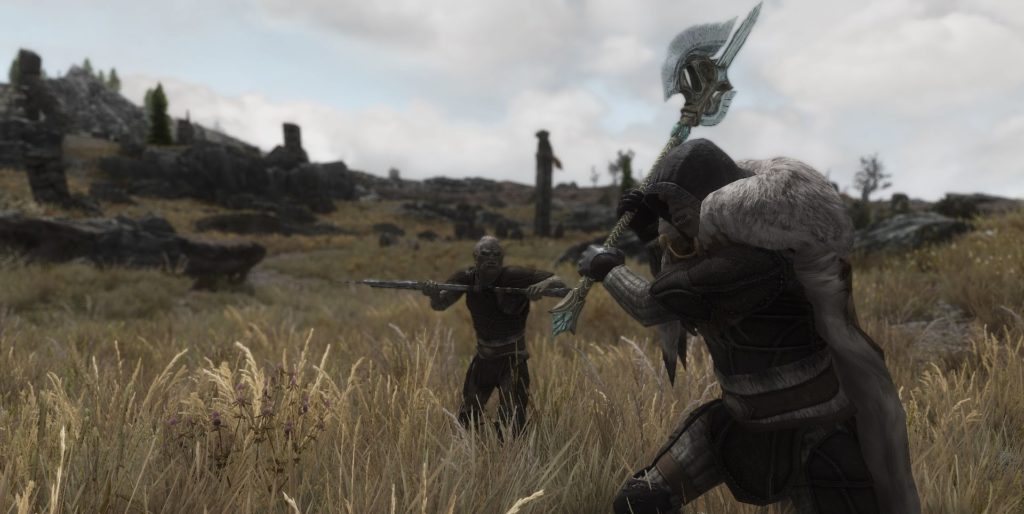 The legendary difficulty is where you’ll see this take the most effect – both you and the enemies you’re fighting can only take a couple hits before being killed, which makes for a brutally realistic experience and makes you feel awesome any time you take down a whole camp of bandits.

Wildcat will leave you susceptible to the stun effects of enemy shield bashes, and both you and the enemies will take more damage when injured, which makes sense if you think about it. The injury system is the coolest thing about this mod, granting you or the enemy a random debuff should you (or they) fall below a certain threshold. This debuff can be a stagger, a slower walk, reduced magicka, or randomly falling over. 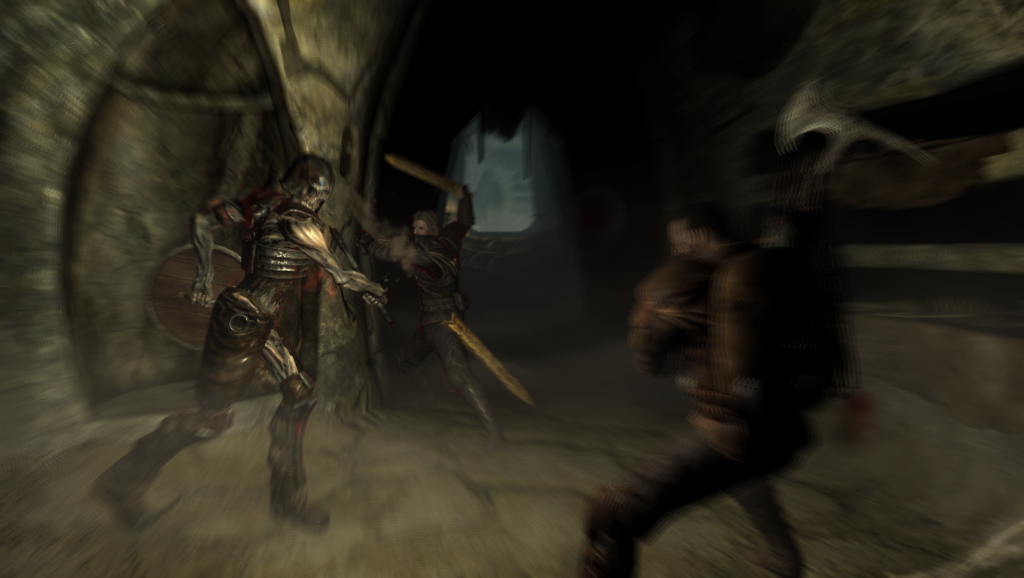 If you’re looking to change the way you play Skyrim from start to finish, this is a fantastic mod to get.

Ultimate Skyrim guide: Which race is the best?

One of the most popular immersion mods out there, Frostfall takes Skyrim and turns it into a survival game, akin to something like  The Long Dark. Frostfall adds several survival-based mechanics to the game, including exposure, coverage, and even a new perk system.

Exposure will measure how much the current weather conditions are affecting you, and if it gets too low you’ll begin to suffer some debuffs like dampness or even frostbite. This means slower movement and reduced regeneration rates. Let it get bad enough and you’ll eventually collapse and need to be rescued (whereupon you’ll wake up in a nearby inn, or die depending on what difficulty you set). 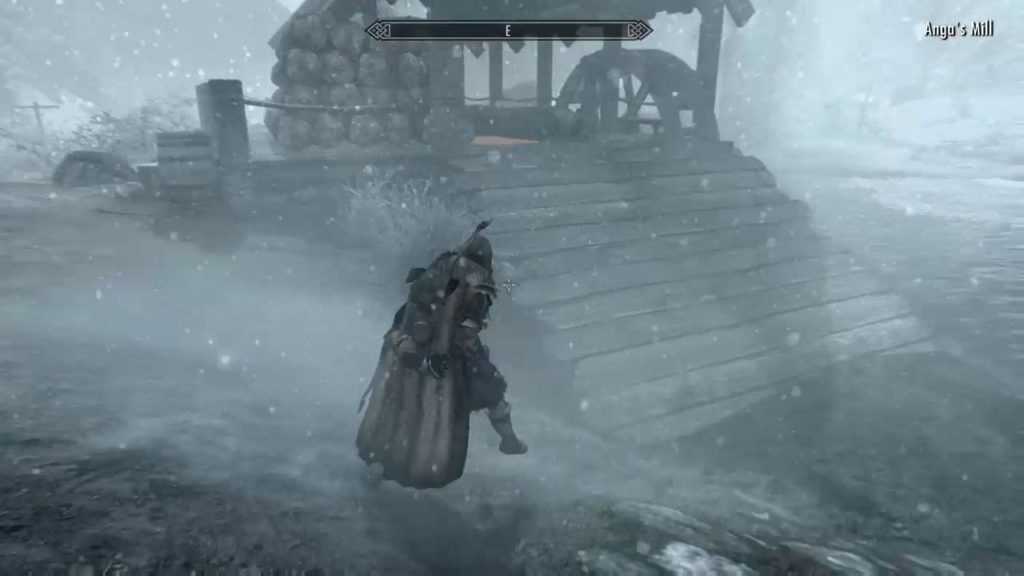 Wearing layers will keep you warm and will cause your exposure meter to fall at a slower pace. What’s really cool is the optional plug-in that shows you how much warmth and coverage any gear in your inventory will provide. This serves to really make Skyrim feel like a new game, or like you’re playing on a new campaign plus. 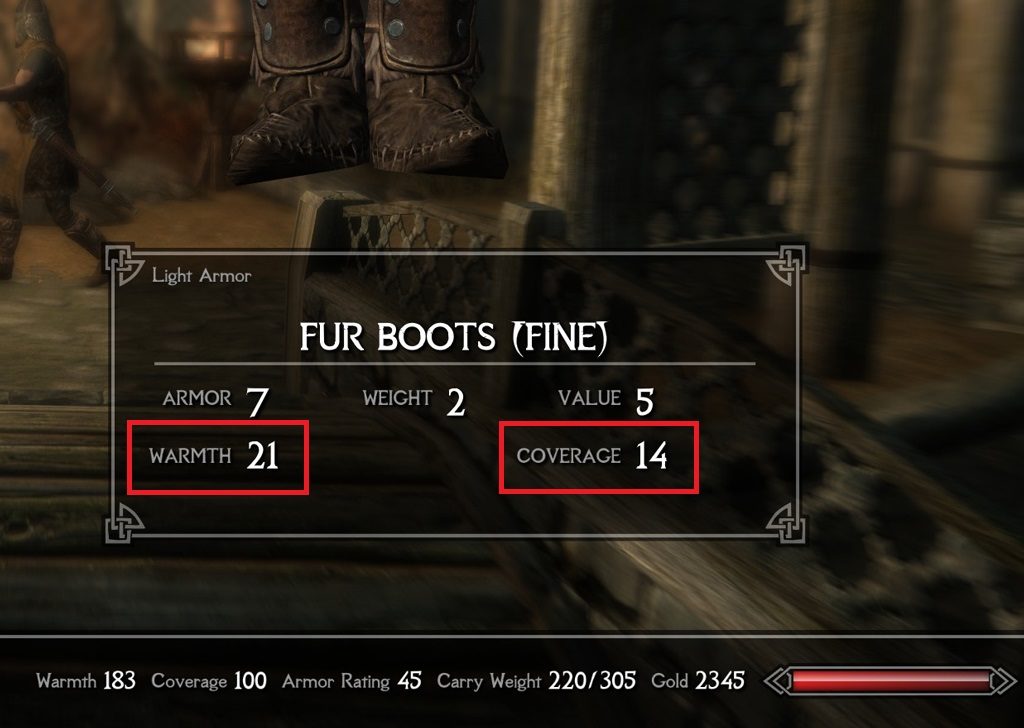 The new perk system is divided into two trees: Camping and endurance. Camping helps you harvest materials needed for building campfires, setting tents, or even using a walking stick when traveling rougher terrain. To level it up, you’ll light fires and build campsites. The endurance tree provides more passives and stat increases to help you survive for longer before suffering the debilitating effects of the cold. 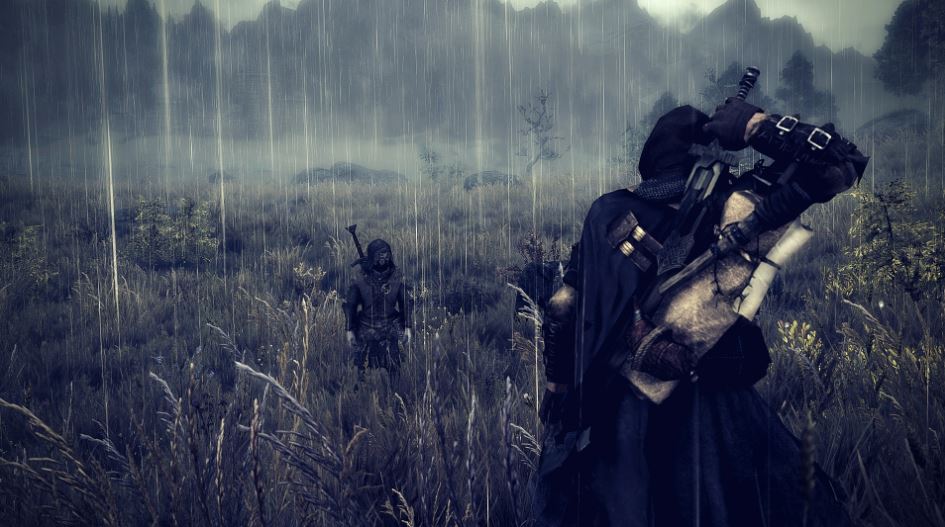 Frostfall couples extremely well with isoku’s Wet and Cold mod, which adds new breath and frost effects to both you and NPCs, as well as having them react to harsher weather conditions by donning cloaks, hoods, or heading indoors. All in all, this is an excellent mod if you’re ready to tackle a highly realistic Skyrim with a bunch more factors to take into consideration. 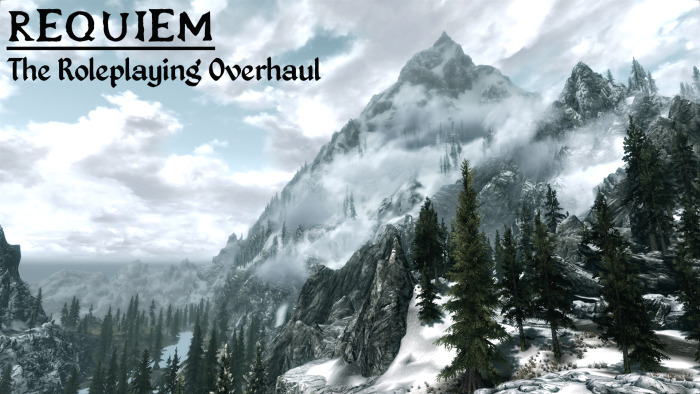 Modders have created several different skill tree overhauls for Skyrim, most notably Perkus Maximus or Ordinator. Requiem, however, is in a class of its own, and drastically alters the entire role-playing experience. Requiem changes the level scaling of all enemies in the game, meaning that a creature’s difficulty no longer derives any impact from what level you are as the player. You might not think this will have much effect, but when you’re suddenly killed by a wandering draugr in one or two hits you’ll quickly see what we mean.

For players who enjoy a challenging game like Dark Souls or Ninja Gaiden, this mod certainly spikes the difficulty. The flip side of the coin, though, is that Requiem provides much more reward for leveling up and becoming the biggest, baddest dude to walk the lands. It feels more like you earned it, and like you’ve more cemented your title as Skyrim’s top dog. 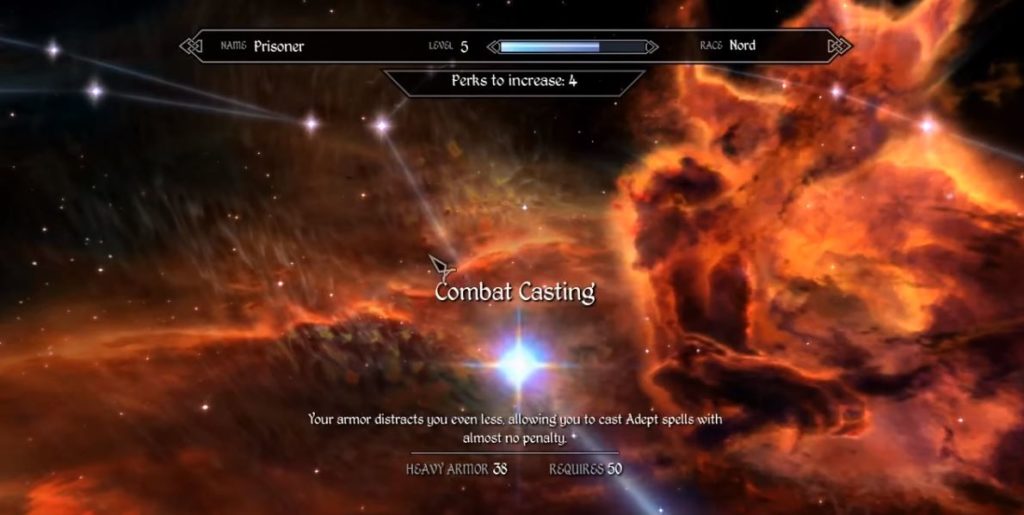 Lastly, Requiem totally overhauls Skyrim’s perk tree, substituting the bland descriptions of abilities for more flowery dialogue about your growth in this harsh world. All the skill trees that do not receive a benefit from your race of choice will begin at 5 instead of 15, meaning you’ll really feel the role-playing element of choosing, say, a high elf. As compensation, perks are few and far between in Requiem, but adding one will really make you feel a difference in the way your character plays and how powerful you feel. 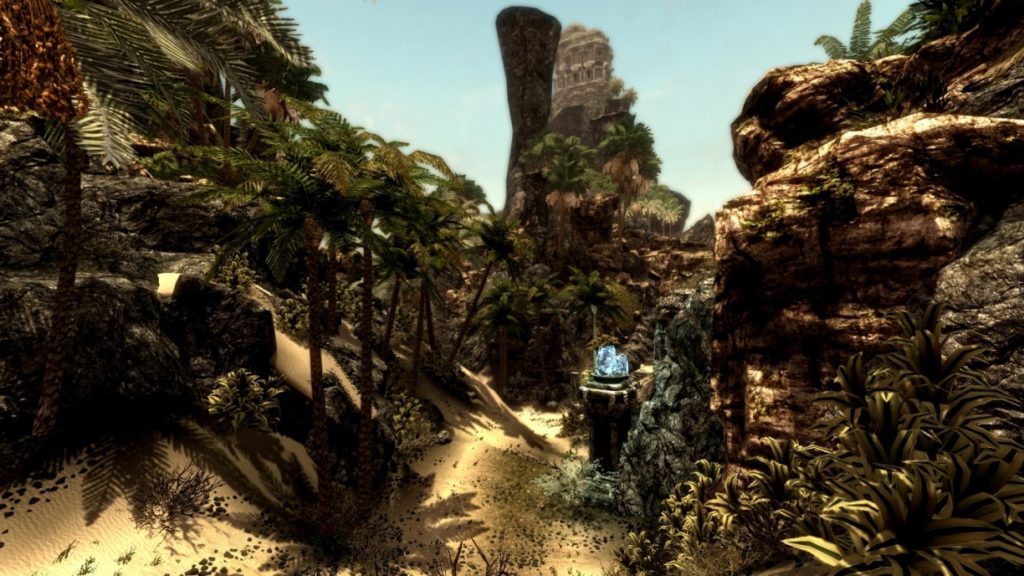 While the other mods on this list serve to radically restructure various elements, quests, or core gameplay of Skyrim, Enderal is something else entirely. Enderal strips away everything you know about Skyrim’s story, location, assets, and characters, leaving pretty much only the game’s engine intact.

Enderal keeps the same menus and HUD that you’re familiar with from Skyrim, and you’ll pretty much be earning experience in the same way as you would in Skyrim. This serves to make the whole game feel like the Skyrim that could have been, like Skyrim were it developed by a completely different team than Bethesda Game Studios.

Enderal is anywhere between 30-100 hours long and features new classes, weapons, skills, enemies, exploration tokens, as well as a totally re-balanced combat. The overall experience is far harder than Skyrim, and it’s borne both from what is in the game and also from what is not. There is no fast-travel for example, and players must walk from location to location to return to cities or ruins that they were not able to fully investigate earlier. Waiting has hugely nerfed, and in Enderal can only be done at an inn or in a bed, and health regeneration is largely reduced.

Where Enderal really cranks things up to 11 is in its story, lore, and world-building. Every NPC is fully voice-acted, and voice-acted well, providing a deeply immersive, compelling experience. Enderal even has gambling mini-games at certain inns, and generally, the whole of the game feels like a real living, breathing world complete with varying environments and enemy types – something that the default Skyrim was often criticized for lacking. 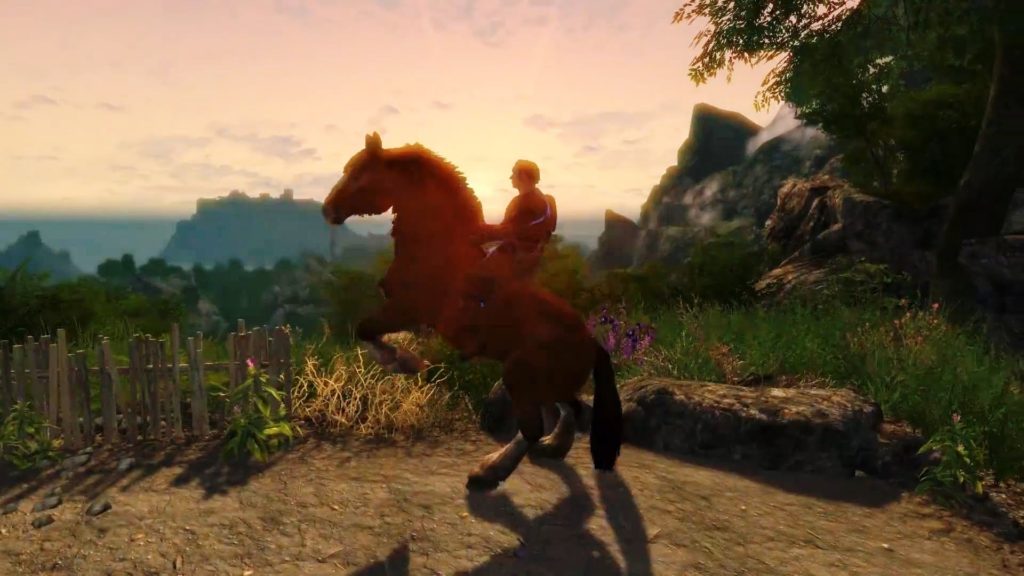 Enderal is more stable than Skyrim, but the improved visuals do make it more taxing on your computer, so be sure your system can handle it before booting it up. If your rig can run Enderal, though, we definitely think it’s your best bet for rediscovering Skyrim through wholly new eyes.