5 things EA can learn from Fortnite

The relese of EA’s Star Wars: Battlefront II received about as much flack as Jar Jar Binks. Reviewers pulled no punches in speaking out against the overly corporate taste it left in their mouths. The game got so much bad press that Oskar Gabrielson, the General Manager at DICE, tweeted a formal apology about its design revolving so much around in-game purchases.

The result was a surprisingly immediate removal of all micro-transactions, followed by a re-balancing overhaul shortly after. Fortnite, for the scant few that have not heard of the title, dropped on July 25, 2017 – less than four months before Battlefront II’s November release. Critically acclaimed and still boasting a lobby of an estimated 125 million people, Fortnite is the clear victor between the two. But what was it that made such a glaring difference between the two games? Where did Battlefront II go wrong?

Both are shooters, both have extensive focus on multiplayer, both are professionally polished in their own way. On paper, Battlefront’s addition of a single player campaign should have made it a shoe-in. Plus the (officially canon) campaign set in the beloved Star Wars universe should have had fans falling in love with from the first few minutes in.

Not as much as EA and DICE had hoped.

There’s obviously any number of huge differences between these two titles, but we’ve singled out five crucial choices that led to Fortnite’s resounding success compared to their competition of EA’s Battlefront II.

Getting the big one out of the way first, the major gripe the gaming community had with EA’s Battlefront II was the prevalent and glaringly tacky focus on micro-transactions. The outcry was so loud that ‘loot boxes,’ an integral part of Battlefront II’s reward and level-up system, were being compared to gambling. Yep. U.S. Senator Maggie Hassan went so far as to say such methods were especially dangerous for kids, stating that “in many cases, these are being marketed to and used by children, who are obviously particularly susceptible to being addicted to them.”

It does seem like an ill-disguised slot machine. Hassan might have a point. So is Fortnite exempt from this egregious offense?

While Battlefront II sold for a minimum of $60 on release, Fortnite was and still remains completely free to download. The game doesn’t have any ads either, so how exactly does it make money? Without going off on too much of a tangent, the simple answer is micro-transactions. That’s right, the same flaw everyone was up in arms about with Battlefront II. It’s present here in Fortnite as well. There’s more information on how this process generates income here.

So what hypocrisy is it that we’re okay with this transpiring in one game, yet furious about it with the other?

The reason is actually quite simple. In Fortnite there are really only two things that’ll cost you money: Buying cosmetic items and the Battle Pass. Neither of these have any impact on your gameplay, and are just there for aesthetic or to freshen up various aspects of your game. 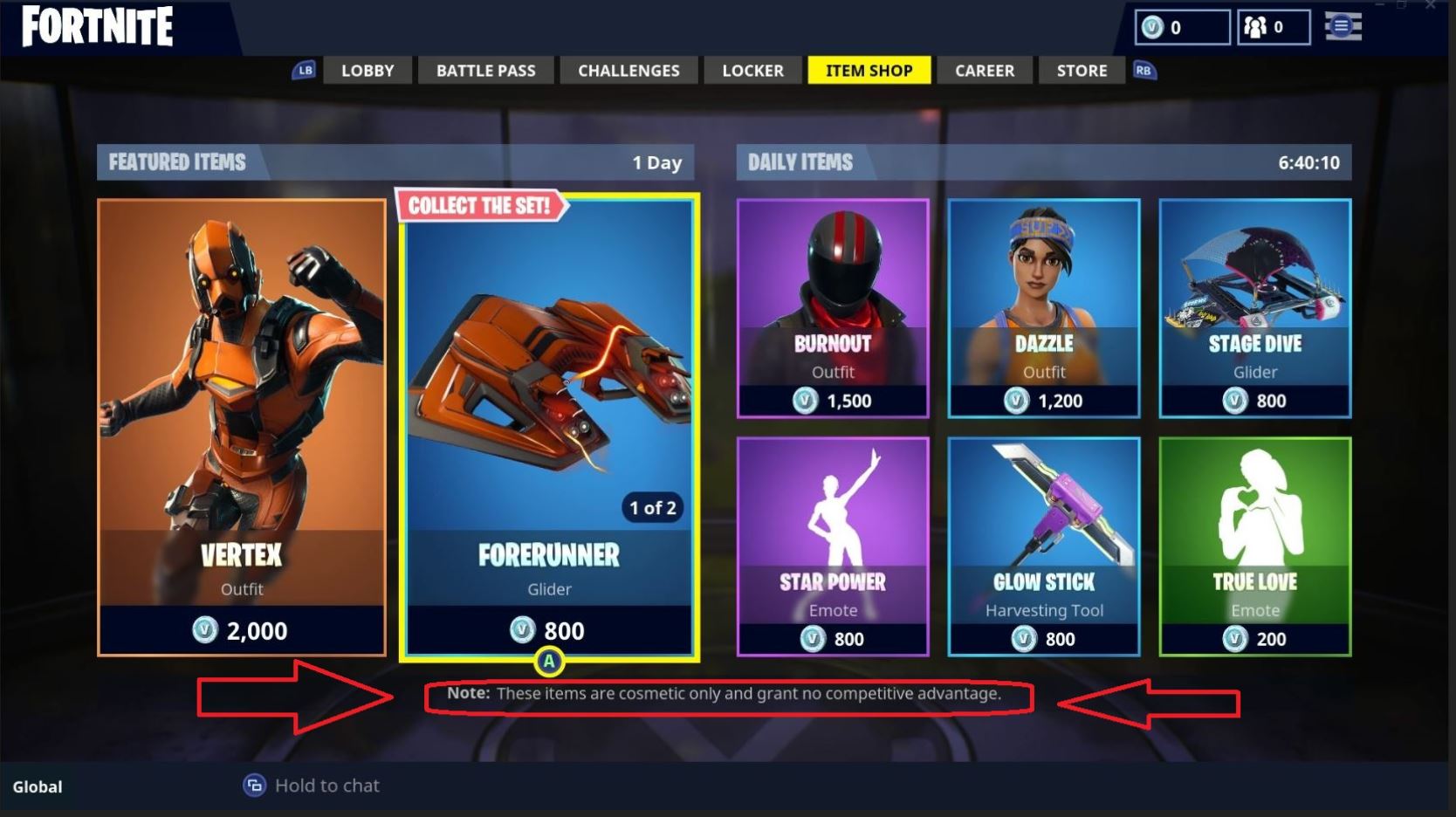 Meanwhile, we put 65 hours into Battlefront II’s multiplayer, and this was after the removal of any in-game micro-purchases. However, players who pre-ordered the game still had a huge leg up over the competition, with higher-tier weapons and epic level star cards. We shudder to think what things were like before the update, and just how much content was originally supposed to be available to players willing to cough up the extra money.

While Fortnite is not the first game to reach this monumental landmark (that title goes to Sony and Square Enix’s Final Fantasy XI), this is a genre that sorely needs this element. With 100 players per match, having access to players from Xbox, PlayStation 4, Windows, Mac, Nintendo Switch, and even mobile devices widens the net so much that the longest waiting time we had before a match was about 30 seconds. Battlefront II, confined to one platform per lobby, took longer – upwards of a couple minutes loading a match.

Besides enjoying faster load times, Fortnite, like any game, is made better simply by virtue of playing with friends. Having a team helps your survivability (and your sanity), and we were excited for this first opportunity to play a game like this with our mobile gaming friends. With such a focus on multiplayer, Fortnite’s inclusion of cross-platform gameplay is a huge sigh of relief.

Going up against the iconic lore and look of Star Wars, we couldn’t believe that Fortnite’s presentation left a better impression. We’re not talking strictly about visuals here. If we were, Battlefront II has it in spades, being one of the prettiest games we’ve ever seen.

What we’re trying to highlight here is more that Fortnite’s vibe is consistent. With zany character and weapon models, dancing players, an intro cutscene that made us chuckle, and even just the general feel of the map, we never questioned starting each match skydiving off a party bus.

Did Battlefront II fail at its aesthetic?

No. But there were some odd inconsistencies. The silly animations and dances of Fortnite’s emotes were just one more element that added to the game’s playful personality. From the get-go players get a taste of what they’re getting into. Battlefront II had <emotes> as well, and they just feel … dumb.

It’s out of place. And so is the bearded Han Solo, and the utterly bizarre choice to feature Bossk so heavily before ever introducing fan favorites like General Grievous, Count Dooku, or Jango Fett.

What set Fortnite apart from other massive online shooter games like PUBG or H1Z1 was the clever implementation of a build system. Players can build forts using varying degrees of build materials that are harvested around the map. Comparing a mechanic like this to Star Wars seems like apples and oranges, but hear us out.

Building in Fortnite can be much more than a game mechanic. It’s a personality, maybe even an art form. For such a simple idea, a player’s expression can really come through in a visually striking way, which promotes some sorely-needed sense of individuality in a map you’re sharing with 99 other players. Skilled players can find clever ways to out-build and outmaneuver their opponents, and 1v1 scenarios quickly become a contest of not only a player’s aim, but of their ingenuity and foresight.

Battlefront II features a maximum of four playable classes at the start of each Galactic Assault match, each class having their strengths and weaknesses. For further depth, each class can be outfitted with different star cards and weapons so they can better specialize at their chosen niche. While this is a generally good start, it’s crazy to think that the build system adds so much unique choice to a game with one hundred players, all of whom are starting the match on equal footing without a class.

We’re not saying we want a build system in Battlefront II. Far from it. But we are missing the greater sense of player freedom and creativity that really shone in Fortnite. If Battlefront II gives players a paint-by-number book, Fortnite hands them a blank easel, a handful of colors, and says “go crazy.”

From the first seconds of a Fortnite match, the player begins by skydiving in with access to virtually any corner of the giant map. Immediately upon landing, they’re either engaging in a firefight or furiously scavening for resources and weapons. What makes the mad dash exciting match after match is the element of randomness that comes with opening a chest, predicting the ever-growing storm, or looting the body of another player. The items found in the chests sprinkled throughout the map are randomized, meaning that even if you choose to land in Junk Junction every time, you’re not guaranteed the same outcome.

The implication of a die roll keeps Fortnite fresh and adds a subtle underlying excitement – a ‘what if’ scenario that plays in the head, speculating what could have been had the loot been different. What you chance upon can radically affect your game, with good equipment sometimes carrying you all the way to the white-knuckle endgame.

The only random elements Battlefront II features are the map chosen and the skill and choices of other players, but that’s really a given with a multiplayer game. Matches in Battlefront II progess through stages. Naboo is a ground assault in the city of Theed, then a push inside the palace, culminating in a King of the Hill for the throne room. We landed on this planet numerous times and the only instance where this was not the formula was if the Separatist faction gets skunked before the next stage can occur.

A decision from EA’s first Battlefront title that got a mixed response was the spinning blue tokens hovering on the map. Picking these up granted a one-shot item, vehicle, or hero that the player could use. While maybe not the best way to implement such core features in a Star Wars game, there was at least a feeling of anticipation every time you picked up one of these tokens.

While we think removing these was a step in the right direction, we do love the feeling Fortnite gives us every time a chest spews out a handful of randomly-generated loot. It’s this idea that you could at any time bump into a game-changer that can instill hope in a less skilled player, and it’s the same idea that encourages caution in players resting on their laurels. You can’t sit pretty in Fortnite until you’re the last player standing; there’s always someone who could stumble on a sniper rifle or a shield in a chest that might knock you off your mighty tower.

Despite its flaws, we still enjoyed a lot of things that EA Star Wars: Battlefront II offered, and this is not meant to be a scathing condemnation. Rather, like the Dalai Lama teaches, “When you talk, you are only repeating what you already know. But if you listen, you may learn something new.” We think that EA has to keep aware of design decisions other games are doing that ARE widely successful. There’s a lot to be gained from seeing what fans like, from Fortnite and even from Pandemic’s original 2005 Battlefront II. We’re hopeful that they might!