You can’t overstate just how useful smartphones are these days. They can do pretty much anything and everything. You can take great photos, take care of pretty much any work-related task, contact people all over the world and have actual face-to-face conversations, and obviously access all the wonders the internet has to offer from almost everywhere.

The other big thing smartphones have to offer these days is video games. You don’t need a specialized gaming phone like the Asus Rog or the Razer Phone to get console console-like graphics on your mobile device. Most phones these days can handle state of the art graphics and hold vast game worlds that take days to uncover and explore. There is a rich gaming experience to be had with your iOS iPhone or Android devices and today we’re going to go through the best free platforming games you can play right now.

It shouldn’t come as a surprise that when they made a game about a cat that had phantom superpowers it became so popular that they simply had to make a sequel. Well, that is exactly what happened and Super Phantom Cat 2 is the result. This 2D platformer is a lot of fun to play with Phantom Cat’s superpowers creating all sorts of interesting dynamics that add to the gameplay.

There are plenty of mini-puzzles and games here to get into as the main action that plays as a fast-paced side scroller with plenty secret areas to discover, enemies to get the better of, and obstacles and platforms to jump over. This game is colorful too with a trippy feel to it that makes you feel lie you’re playing around inside a cat-themed crayon box. Try this game now.

Rayman is the classic protagonist of one of the best platformer series ever. He’s been around forever and starred in a lot of great games. In fact, at the moment there are quite a few Rayman games available and they’re not all platformers. There’s also Rayman Jungle Run and Rayman Fiesta Run, which offer interesting side-scrolling takes on the Endless Runner genre.

Rayman Adventures takes these classic tap and swipe dynamics and adds a little more nuance, giving you control over Rayman’s vertical as well as horizontal movements. The results are a frantic-feeling action platformer that keeps going and going. The action is always a challenge but never stops being fun in the meantime. 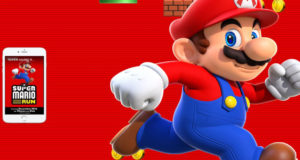 Super Mario Run was the first mobile game from the legendary Nintendo. Ever since he first appeared on the 8-bit Nintendo Entertainment system way back when Mario has been the king of all platformers. When Nintendo took him to mobile the plan was to keep all of the platforming elements that Nintendo fans had come to love but to make the experience fun and relatable on smaller devices often used with just one hand.

The result is a non-stop running game that sees Mario sprinting across the screen from left to right with the player simply controlling when Mario jumps and how high or how far he goes. With other cool dynamics like wall jumps added to the action, Super Mario fun is a lot of fun and feels like a premium mobile game in every way, even if you could say that is gameplay is limited compared to the bigger console versions of Mario that are out there. If you’re a Mario fan, there’s a lot to like here and you can try the game for free before having to commit to the relatively high purchase price for a mobile game.

Another classic platformer to rival Mario but this time coming from Sega is the inimitable Sonic the Hedgehog. Sonic is the ridiculously fast Hedgehog that for decades now has been battling against the evil Doctor Robotnik. Sonic’s antics are so famous that he’s recently been the protagonist in his own movie battling against non-other than Jim Carrey.

Sonic’s background makes him much more suited to high-speed frantic action than Mario and all of Sonic’s mobile games showcase this well. Game worlds in Sonic games are lush beautiful places filled jungle greenery, beautiful gold coins, and all manner of baddy out there looking to take them off you. The other great thing about Sonic mobile games is that they’re pretty much like for like reproductions of the full version games you get on consoles. Sure the controls can feel a little clumsy at times, dragging your fingers along virtual D-Pads on your touchscreen device the fact the full games are here on your mobile device and play so well is a testament to how well they were made in the first place.

Blackmoor – Duberry’s quest is the final game in today’s list. Although it might not have the name recognition of a Sonic or a Mario, you can still expect a very good side-scrolling platformer here. You pick your hero and then you through 16 different worlds that are filled with 57 different types of enemies for you to vanquish. What makes this game so great, however, is that all worlds are randomly generated meaning you’ll never play the same level twice. If you add to this the fact that you can play cooperatively with friends, and you really have a lot of games to get into on your mobile. This is definitely up there with even the biggest names in today’s list.