Crossovers and gaming have a long history with each other. Some of the most successful franchises in gaming today are based on unlikely crossovers. Who would’ve ever thought we’d see Mario fight Sonic and Mega Man in Super Smash Bros? Or seeing Cloud Strife fight alongside Donald Duck in Kingdom Hearts?

While Smash and Kingdom Hearts are two beloved games that everyone loves, here are some really weird crossovers that may have flown under your radar.

5 most bizarre crossovers in gaming history

5. The guest characters in Tony Hawk

What you may or may not remember, however, is just how many weird guest characters hopped on board. While you had access to basically every major pro skater you could imagine, you could also choose from more colorful characters from popular culture. You could pop ollies as Marvel superheroes like Spider-Man, Wolverine, and Iron Man, grind along rails as Shrek, and hit 1080 melons with Darth Maul and Jango Fett. Even Tony Hawk Pro Skater 5, which is a horrible game, included guests like the Teenage Mutant Ninja Turtles, Lil Wayne, and Tyler the Creator.

Unlocking all of these characters required searching every inch of every level for secrets, but the novelty of seeing Wolverine skate past Darth Maul was totally worth it. 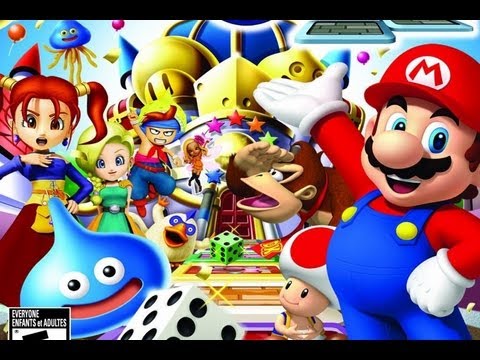 While mashing together Mario characters and Square Enix characters may sound strange at first, it’s really no weirder than Kingdom Hearts. However, when you mix both franchises with a Monopoly-style board game you get the bizarre stitched-together game Fortune Street. Like Monopoly, Fortune Street has players rolling dice and traveling a board to buy property. Instead of playing as a boot or a top hat, players can take control of Mario, Dragon Quest’s Slime, and other mismatched characters. The series is popular and enduring in Japan but has yet to achieve the same success overseas.

Mario Hoops 3-on-3, another collab between Square Enix and Nintendo, makes slightly more sense. For the most part, the game is your standard arcadey Mario sports game, complete with exaggerated gameplay and crazy power-ups. What makes this game unique among Mario sports games is the inclusion of Final Fantasy characters like Cactuar, Black Mage, and Moogle. If, for whatever reason, your dream is to see Waluigi get dunked on by the White Mage, then this is the game for you. The music is also incredibly infectious.

In the most unlikely basketball crossover since “Space Jam,” Mario, Luigi, and Princess Peach face off against NBA superstars in NBA Street Vol 3. Giving LeBron the humbling he deserves as Mario himself was an amazing feeling back in the day, but don’t hold your breath on the Mario crew appearing in the next 2K. The Mario crew appearing in the NBA Street series is all the more hilarious as the game features a much grittier art style and aesthetic than the more pristine NBA 2K series.

The inclusion of Mario and friends was part of a licensing agreement between EA and Nintendo. The agreement also saw the Mario Bros. as playable characters in SSX On Tour, letting the brothers pull off radical midair snowboarding stunts. The most bizarre crossover to come out of this agreement, however, was the inclusion of Punch-Out boxer Little Mac in EA’s Fight Night Round 2. Little Mac is the only cartoonish boxer in the game, and his 3-D model looks absolutely horrifying.

Want to see Solid Snake fight Optimus Prime? What, you’ve never even thought of that? Even so, make it happen with Dream Mix TV: World Fighters. Dream Mix is a Smash-like fighting game released only in Japan. Developed through a collaboration between Konami, Hudson, and Takara (a popular Japanese toy company), Dream Mix presents its fights through the lens of an intergalactic TV show. Desperate to boost ratings, a bunch of TV executives summon heroes from across the universe to do battle, including Bomberman, Simon Belmont, Megatron, and Tyson (yes, from Beyblade).

The game is a side-scrolling platform fighter like Smash. Instead of racking up damage percent, fighters in Dream Mix knock hearts out of their opponents. If you collect enough of your opponent’s hearts, their soul will leave their body and fly around. If you can collect their soul before they do, you eliminate them from the match. The game is something that needs to be truly seen to be believed, so here you go.

1. Monster Hunter and literally everything 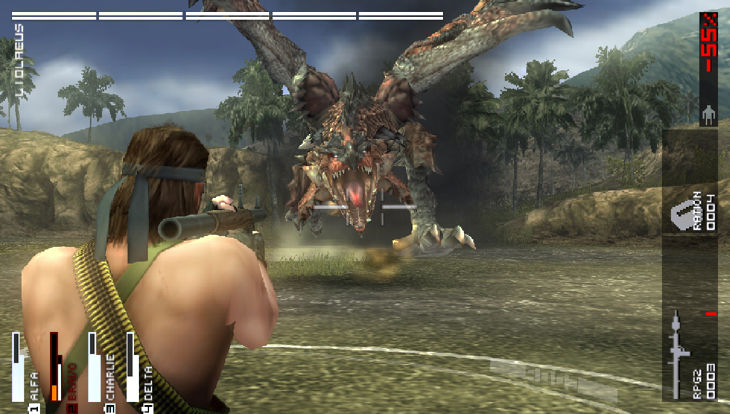 Is there anything Monster Hunter hasn’t crossed over with? The answer, of course, is no. The Pizza Hut collab has to be the greatest crossover in gaming history. 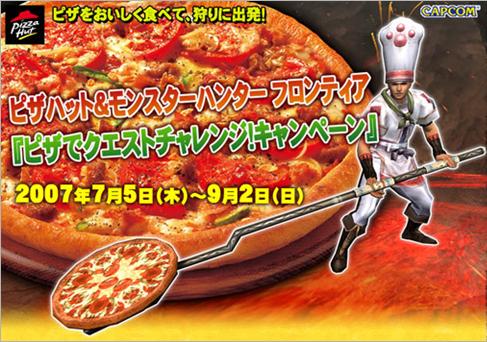 Any weird crossovers we missed? Let us know!