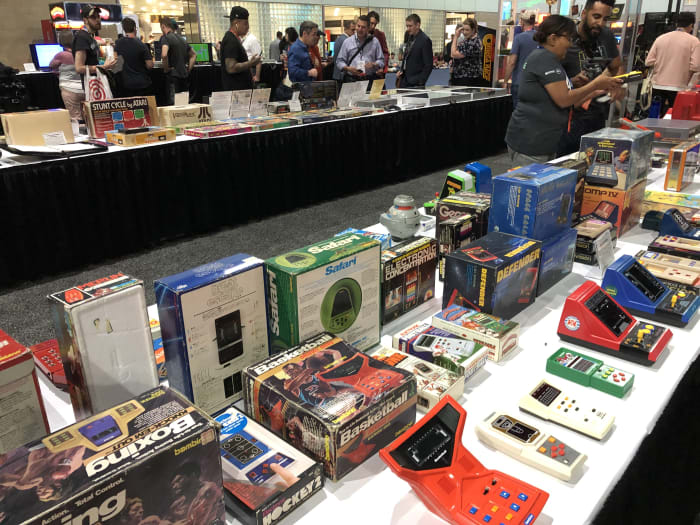 The National Video Game Museum (NVM) shows up each year at E3 and delivers a huge showcase of games, consoles, and memorabilia from multiple generations of gaming history. Some of these can be seen behind protective glass. Others can be picked up and examined. Many of them are hooked up to power and fully playable! What’s more…

There are often no lines!

With so many people wandering around the convention floor on the hunt for big titles – the next release from Microsoft, Nintendo, Bethesda and more – these consoles are usually available to players at any time. Anyone who appreciates historical video games can walk in, pick up a controller, and hop straight into nostalgia city with little wait!

That said, let’s talk about the NVM! We have a few pics of the most fascinating games of all time! Please enjoy… 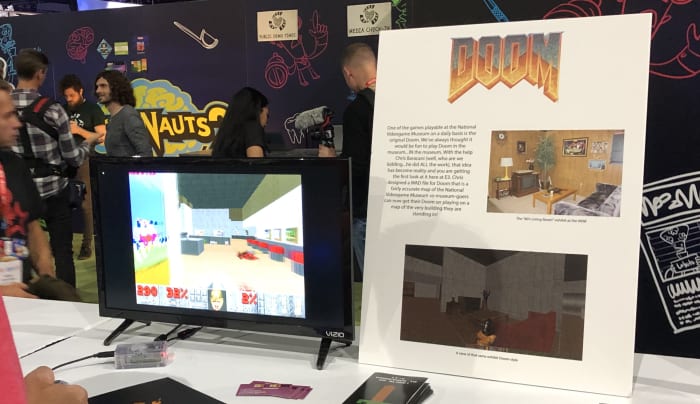 With Doom: Eternal coming down the line from Bethesda, we wanted to throw a shoutout to the original first-person shooter experience. To this day, it’s still fascinating to watch people run around the cubic world, blasting away the two-dimensional demons of hell. 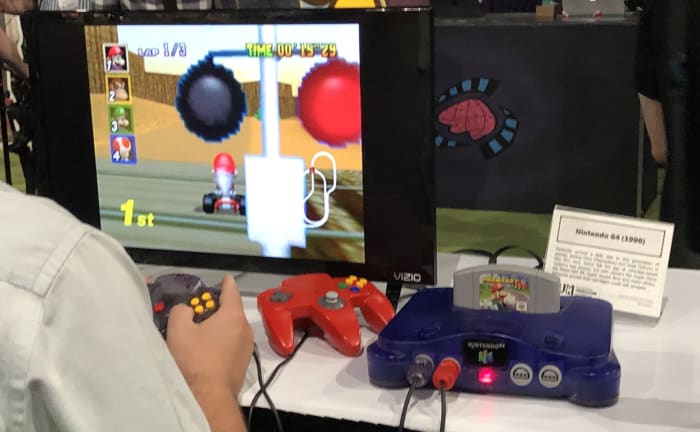 Not gonna lie: you get a little star-struck in the face of greatness such as this. We personally love Mario Kart, but began playing in the Gamecube era with Double Dash (which will always be our favorite, let the record state). However, we never expected to be in the presence of the original!

It holds up well. It holds up SO WELL. A game that old shouldn’t be allowed to play that smoothly, or be that fun. It’s humbling, really.

Look at how cute this thing is! Sorry, we forgot a banana for scale, just trust us: it’s adorably small.

It serves as a good reminder: video games weren’t always released as just the video game alone. Back in the day, a huge variety of toys and other merchandise launched around popular titles like this.

Hopefully, with such a lovable legacy, the upcoming movie will do well after the Sonic re-design… 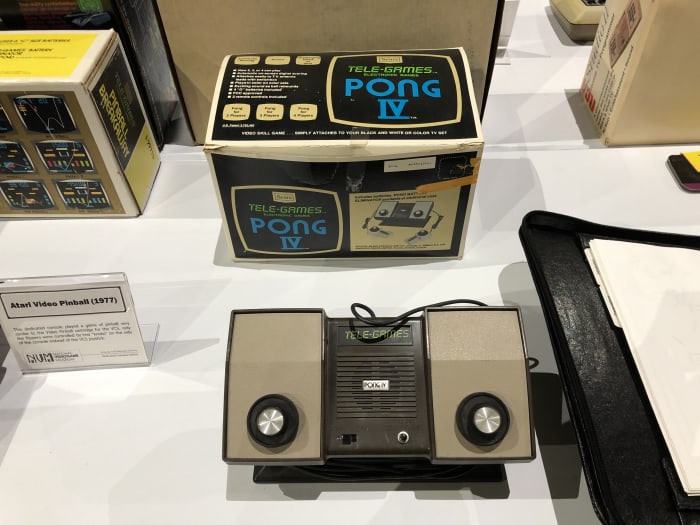 Ah, “tele-gaming”. Remember that? Because we sure don’t! 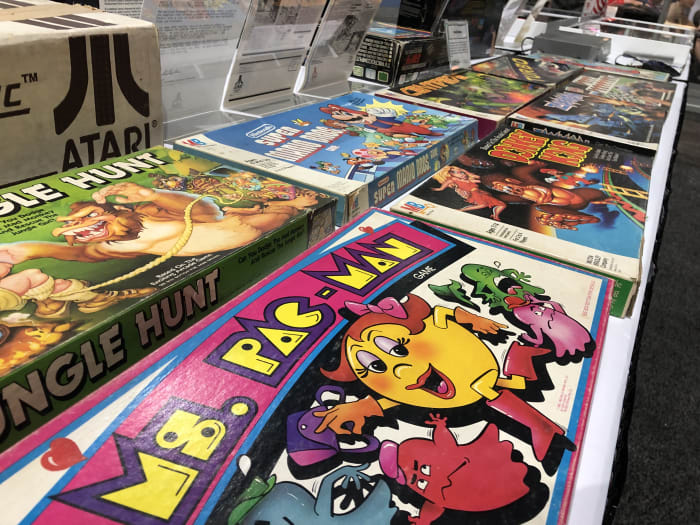 If you think board games = bored games, you’re missing out!

Right near the Sonic pinball game, we found this huge selection of board game adaptions, so many they wouldn’t fit in one photo! Sadly, these are not meant to be played anymore. We can only imagine what kinds of pieces, boards, and rules were to be found inside. 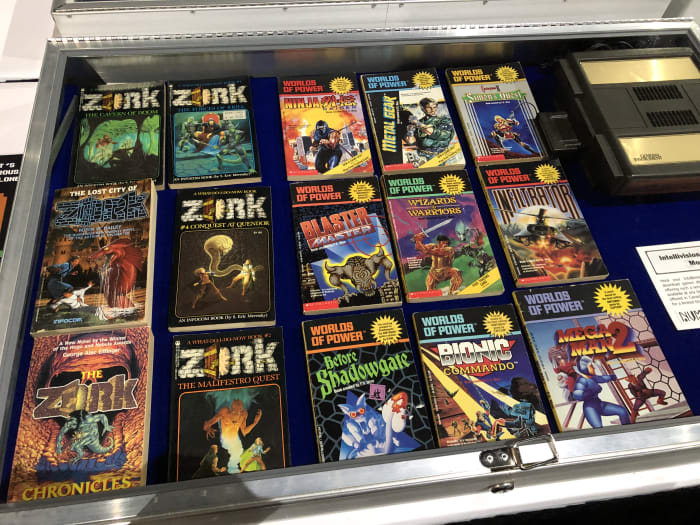 When dinosaurs roamed the earth, sometimes you had to play video games in your head. From Blaster Master to Mega Man 2, there were novels that allowed you play games without a console, using imagination!

The NES and a RED NINTENDO TV 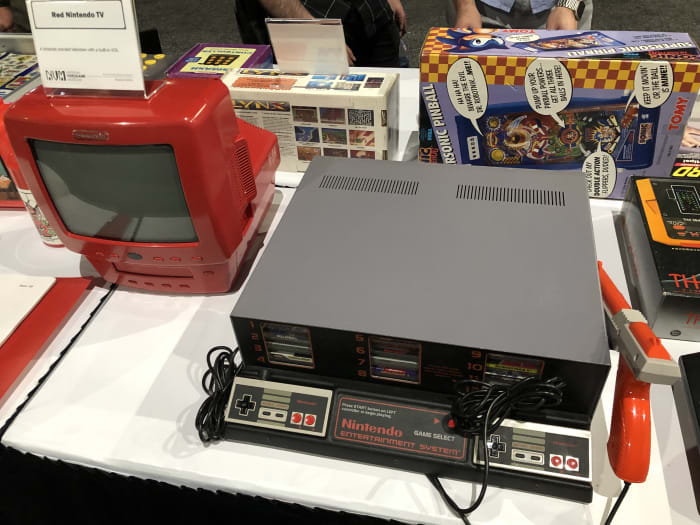 Taking a step back from the N64 and Mario Kart, we had the original Nintendo Entertainment System (NES). Unfortunately, this one wasn’t turned on at the time, which is a crying shame; considering they had the Zapper light gun, it might have been loaded with Duck Hunt inside!

Oh, but we aren’t done yet!

On another table, there was actually a playable NES. At the time, we found it open to the next player with Super Mario World loaded up and a number of games sitting nearby. Take your pick, and try not to get too excited! 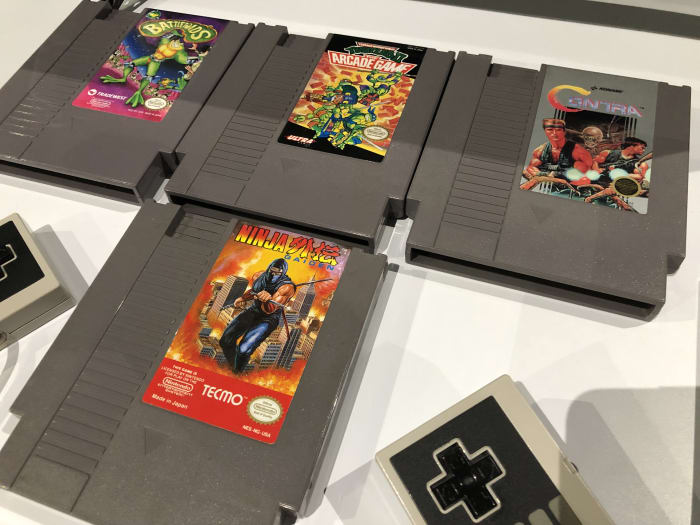 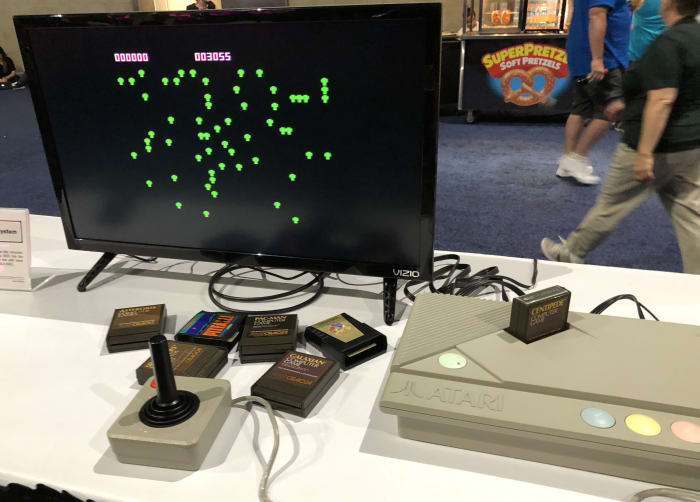 Atari is one of those systems that even modern kids should be able to understand. Even if they didn’t play on the console seen above, they’ve likely enjoyed titles like Centipede, Pac Man, or Asteroids in updated versions. They’re the games that keep on giving! Or, at least, the ones that keep being ported to new devices with fresh graphics.

Still, the National Videogame Museum kindly gave visitors a chance to try them out for real, in their First Form. Aside from Centipede, there were a few others on the table… 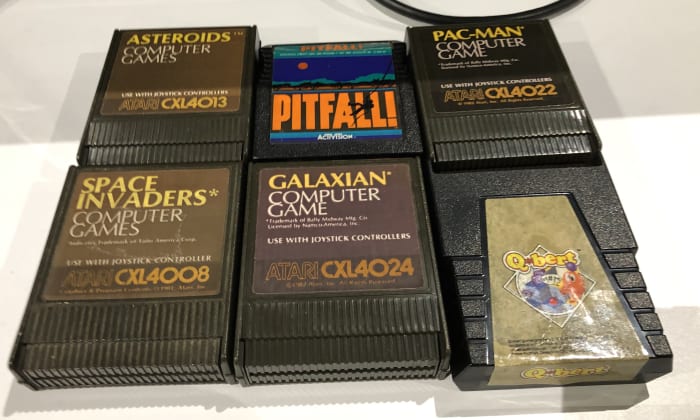 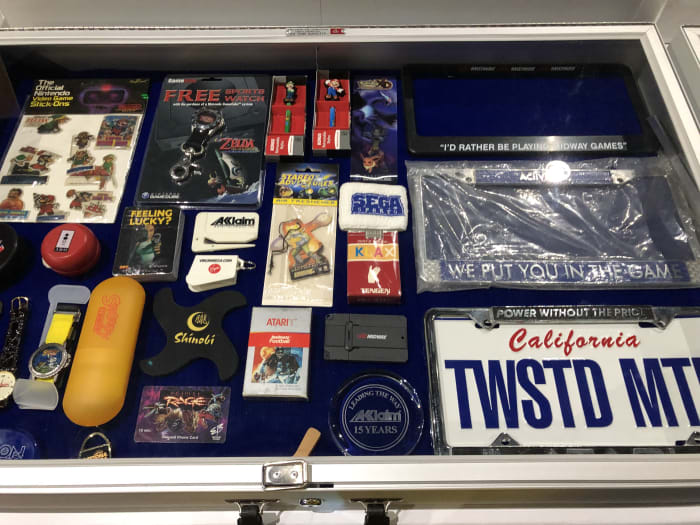 Ready for a little game of “I-Spy”? Good, because here we go:

Even though modern video games release collectibles – the Nintendo Amiibos, for example – they will never be as old and cool and fabulous as these ancient relics. Can you find… the Zelda Watch, free with the purchase of a Gamecube? The “Feeling Lucky?” playing cards themed around Tomb Raider? Maybe the gigantic license plate for Twisted Metal?

Along with those, we were surprised to find an entire case with pins for olden video games. We never really thought of pins as that big a deal until we saw the impressive collection of promotional buttons! Can you find… the “Play Me” Atari pin? The Yoshi’s Island for DS badge? How about the Warner Brother’s Games pin? The “IMB Means Exceptional Service” badge? 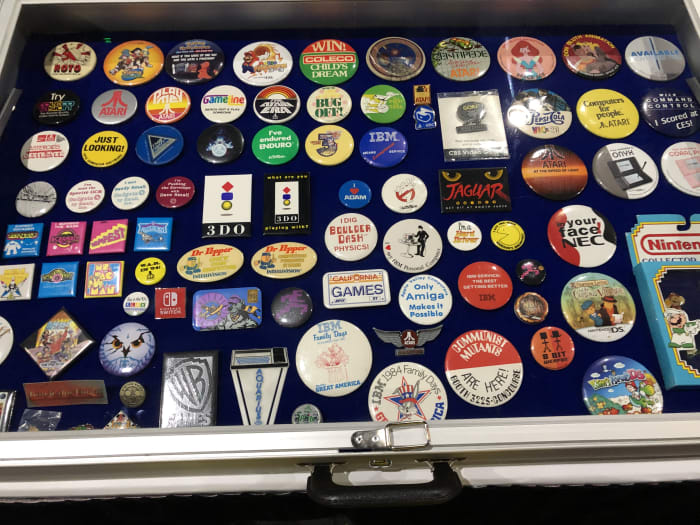 All the Old Arcade Consoles

From classics to niche titles, the arcade showing was strong:

Yeah, they had the full Pong console as well! Please note, for hilarity’s sake, that each player of this iconic game must use a single knob to move their “paddle” up and down to block the ball. Those were simpler times!

This console plays Computer Space (1971), a game that feels like the lovechild of Pong and Asteroids. Unfortunately, it was roped off during E3 and we did not get to play.

There we go: a millennial title!

Released in 2005, Area 51 could be found in all the arcades! We have fond memories of walking past these stations as two players would co-op shooting aliens with the attached guns!

And why did we walk past? Probably to play the even better co-op arcade shooter, Time Crisis… That game swallowed many of our quarters.

The Rise and Fall of Arcades

Remember how some games give off the star-struck feeling? Well, here’s one: Donkey Kong!

Now, reportedly, the protagonist character is actually called “Jump Man,” and isn’t actually Mario. We’re not sure what to think about this ourselves, so take that information as you will.

Crystal Castle asks an important question: what would it be like to play a bear searching for gems, being hunted by monsters, on an eclectic grid system where movement is controlled by the player rolling a ball?

The answer was this wonderful game, which still both intrigues and confuses us (in the best ways) since we tried it as kids!

Second to last, we have a classic. It may not have extensive remakes, but Dig Dug still holds a special place in our heart as the arcade game that our parents would always gladly talk about when the subject of video games came up. Family times!

And what better game to finish with than…

Growing up, we played Super Mario Bros Deluxe on the Gameboy Color. It’s hard to describe the excitement of playing on a full console, remembering all the secret transport pipes, the mushroom blocks, and the hidden vines to heaven. This game truly deserves all the love it’s received through the many, many years.

We enjoyed our time walking through the annals of video game history and taking in the sights. If you missed E3, but still want to see more, visit the National Videogame Museum! Nothing deepens appreciation for modern games like a short (or very, very long) walk through the years of gaming that started before Pong and led up to the newest reveals of E3 2019.

Netflix Is Wrong! It HAS Canceled Plenty Of Successful Shows