At just 19, Italian freelance programmer Gabriele Cirulli created 2048, a puzzle that’s got millions hooked. Luckily, we got the chance to talk him to find out more about this addictive game.

As he’s admitted in another interview, the idea of ​​2048 isn’t original – it came to him via a contact. Games like 1024! and Threes (Android/iPhone) already exist, but it’s 2048 that’s stealing the limelight. The obsession began when it appeared in Hacker News. Then, things got crazy. 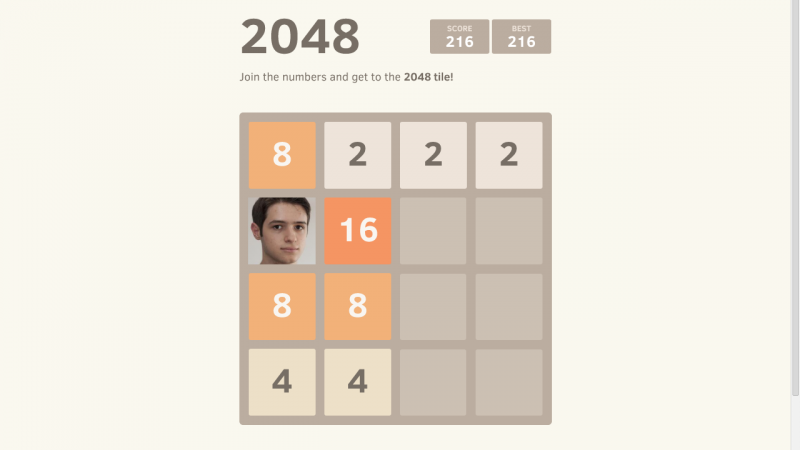 F: You said on Twitter that players have spent 521 years playing the game in total– in six days…

G: I hope I haven’t gotten anyone in trouble! It’s really hard to stop playing (it happens to me too sometimes), and sometimes this makes us forget about the more important things.

F: Aren’t you afraid that you’ll end up like the creator of Flappy Bird?

G: Although on a much smaller scale, I think I’ve already gone through that phase. During the first week, due to the game’s unexpected success, many people suggested that I should earn money through advertising or creating an app. This is not what I wanted to do, but I needed the two stressful days I had before making the decision not to monetize the game. Once I made the decision, I stopped feeling awkward.

The original game will always be free.

F: Have you ever won?

G: I still haven’t managed it! My record score is 16,000 points, in a game where I had enough to match two 64s to win, but I lost because I didn’t figure it out right away.

G: For two reasons. The first is ethical: I will not make money off of something that I didn’t invent – it would be unfair. The second is technical: the game is open source, and this means that anyone can take the source code and publish it as an app. I don’t think this genre needs competition, that would only lead to market saturation. The original game is always available on Github, for free.

F: Which is your favorite version of the game?

G: Yesterday I discovered the “doge” version of 2048 and I found it really funny. Also, I really like the artificial intelligence that has been created to beat the game, 2048-AI, mainly because it can win, while I can’t.

I don’t want to earn money for something I didn’t invent.

G: A technique I discovered online that I’m using for now (although it’s not working for me), is to use only three directions, while maintaining the highest number in one corner. This allows “chain reactions” to start which makes it easier to reach high numbers, since they’re all lined up and ordered.

I hope I haven’t gotten anyone into trouble!

F: Do you have plans for the future? Any new games?

G: Right now, I’m trying to return to the freelance projects I was working on before launching 2048. I haven’t made ​​any plans yet, though I doubt that I’m going to create any new games.