The cultural phenomenon that was “Game of Thrones” came crashing down around us recently as its eighth and final season bombed hard. We needn’t have worried, as HBO quickly followed it up with “Chernobyl,” which has already established itself as one of the preeminent cultural achievements of recent times.

You can always count on HBO, but it isn’t like we haven’t had truly entertaining masterpieces coming from elsewhere recently. Netflix has recently been spoiling us with great movies and TV shows. The first season of “Stranger Things” was heralded as a genuine masterpiece. On our phones, we’ve recently been bowled over by AR games that spill into the real world with Pokémon GO bringing cities around the world to a grinding halt just three summers ago. 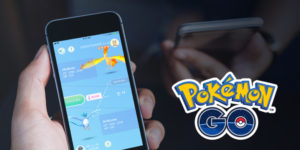 We’ve certainly been spoiled, it has to be said, but it looks as though things are about to get even better as we have a truly epic combination on the horizon. In 2020 we’ll see a new “Stranger Things” video game land on our mobiles that will play like Pokémon GO.

Next Games is a game developer based in Finland, famous for games for “The Walking Dead.” In their Walking Dead game, Next overlays the zombie apocalypse onto the real world using your smartphone camera. Players can also call in help from famous characters from the show and even team up with real-world friends in the battle against the dead.

Next Games has now announced it is working with Netflix on something similar for “Stranger Things.” Next Games CEO, Teemu Huuhtanen, had this to say in a recent press release, “We are huge fans of Stranger Things and thrilled to work together with Netflix to bring our shared vision of Stranger Things into life in a mobile game format. Our core focus will be to deliver on Stranger Things’ rich and intense themes like friendship and supernatural adventure, and translate these into snack-sized entertainment on your mobile device.” He also pointed towards a global release that should come to all Netflix users around the world.

There is no trailer for the game yet, but there are a few snippets of information out there about how the game will look, feel, and play. We’re told that the Stranger Things universe will be presented in the style of an 80s Saturday morning cartoon show, like in the image shown at the top of the page. Also, we know that Next Games will use Google Maps integration and GPS data to allow players to explore The Upside Down realm that is hidden all around them.

That’s all the news we have on the game so far, but that is enough to have us hooked already,  but as soon as we hear more news, we’ll let you know.